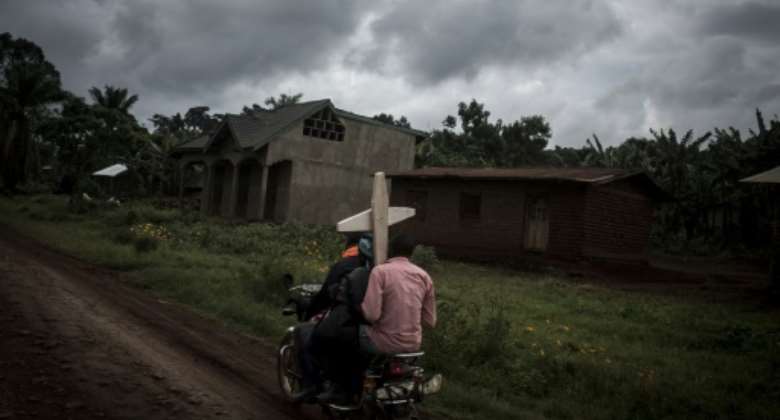 Mangina has been ravaged by rebel attacks and the Ebola virus. By John WESSELS (AFP/File)

Mangina, a town of some 72,000 in DR Congo's volatile east, was eerily empty on Tuesday after a massacre last week by a dreaded rebel group which locals fear will strike again.

On Friday, fighters from the Allied Democratic Forces (ADF) slit the throats of eight people in Mangina, sparking panic and an exodus.

Two days later a force of about 60 ADF members killed two women and five men at nearby Makeke.

On Tuesday, shops and markets were shuttered in Mangina, where the only signs of life were some patrolling soldiers, policemen and Red Cross officials.

Three armoured vehicles of the UN mission in the Democratic Republic of Congo, known by its French acronym MONUSCO, were stationed on the outskirts of the town, keeping watch over panicked residents fleeing their homes.

Mamie Lolita, a mother of six in her 40s, was one of the many women and children leaving their homes for the relative safety of the nearby city of Beni, carrying their meagre belongings in sacks.

Her youngest child aged four was barefoot and carrying a jerry can with five litres of water on her head.

"My husband and our two boys have stayed behind to look after our livestock," Lolita said. "We are going on foot to Beni to avoid being massacred by the ADF who are prowling in our fields."

The Beni region, straddling the North Kivu and Ituri provinces, has been repeatedly attacked by the ADF, which civic activists say have massacred more than 300 people since October.

At the same time, an Ebola epidemic declared in August 2018 with its centre in Mangina is still active across the region, with a total 2,353 deaths recorded among 3,431 registered cases.

Efforts to contain the Ebola outbreak have been hindered by attacks on health workers and conflicts in the east, where the ADF is among a host of armed groups.

The hospital at Mangina was also empty on Tuesday.

"The sick have all fled, even women due to give birth, following general panic," said Darlene Kwasi, a Catholic nun who runs the hospital.

"We are just providing minimum service," she said.

A half a dozen youths were making the reverse journey back to Mangina.

"We'll check out what's happening and then spend the night in a nearby village," one of them said.

The mass arrival of Mangina residents poses a twin threat to the market town of Beni, its mayor warned on Tuesday.

"This situation is worrisome because it presents a double danger: fresh contamination by the Ebola virus and infiltration of the town by the enemy," Jean Edmond Bwanakawa Nyonyi said.

Since Saturday, about four in five residents of Mangina and the surrounding area have fled 30 kilometres (20 miles) southeast to Beni, the mayor said.

"Beni is surrounded by the ADF," warned the mayor, whose town has a population of more than 232,000.

Blamed for the deaths of more than 1,000 civilians in Beni since October 2014, the ADF first launched attacks in neighbouring Uganda in 1995 as an Islamist rebel force opposed to President Yoweri Museveni.

The rebels largely fell back into eastern DRC under Ugandan military pressure from 2002, a year before the end of the regional Congo Wars.

Their recruits today are of various nationalities.

"Wandering enemy forces, defeated to the east, (are blending into) the population," Congolese army Brigadier-General Sylvain Ekenge, deputy military spokesman in the Beni zone, told the media. "We are implementing strategies to halt these advances."

The Congolese army, which launched a campaign against the ADF in late October, claims to have driven the force from its main camps and to have killed five of its six top leaders.

The ADF rebels are accused of killing at least 350 civilians in the Beni region, purportedly in reprisal for the army operations, according to a toll compiled by civil society organisations.

The ADF "have the characteristics both of an armed group and a criminal organisation, and they appear to follow a radical Islamist ideology," according to a report submitted to the UN Security Council.

Mankessim: Kenkey seller knocked down by a speeding vehicle ...
34 minutes ago