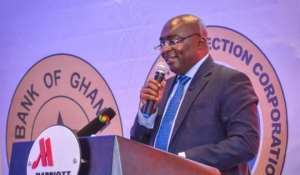 The Vice President, Dr. Mahamudu Bawumia has stated that it has within the last three years reduced 15 taxes in the economy.

According to him, this was done to provide relief to people and businesses, and also to shift from over-reliance on taxation to industrial growth.

Speaking at the government's 2020 town hall meeting in the Ashanti Regional capital, Kumasi, on Tuesday 11th February 2020, Dr. Bawumia explained that, the decision was taken despite the fact that revenue challenges in the short term could have worsened.

“In fulfilment to our promise to move the economy from a focus on taxation to a focus on production and growth, we have thus far reduced at least 15 separate taxes. Reducing these taxes was a brave decision. For any manager of the economy, you come in with an economy which is in dire straits and your first action is to reduce taxes. It is not conventional or orthodox, but we knew it was the right policy for Ghana,” he said.

“We were aware that this could worsen our revenue challenges in the short term but we were of the firm conviction that reducing taxes can spur growth and increase revenues in the medium to long term,” he added.

Prior to the 2016 elections, the New Patriotic Party promised to scrap what it called “nuisance taxes” if elected into power.

Dr. Bawumia noted that the New Patriotic Party government has fulfilled that promise by reducing 15 separate taxes in its first three years in office.

Also, during the presentation of the 2020 budget statement last year, Minister of Finance stated that government will not introduce any new taxes in the 2020 fiscal year.

Instead, it will boost revenue collection to enable it to meet revenue targets.

The rest include full corporate tax deduction for private universities who plough back 100% of profits into the university, the reduced National Electrification Scheme Levy from 5% to 3%, reduced Public Lighting Levy from 5% to 2%, reduced special petroleum tax rate from 17.5% to 13% and introduced specific rates, the 17.5% VAT/NHIL rate replaced with a flat rate of 3 % for traders and the granted Capital Gains Tax Exemption on stocks traded on the Ghana Stock Exchange or publicly held securities approved by the SEC.

However, despite the reduction of the above taxes, data presented by the Vice President indicated that government revenue has increased annually by 25% since 2017, and growth, as envisaged by the government before abolishing the taxes, has also increased since 2017.

“Despite these tax reductions, the data shows that revenue collection in nominal cedi terms has increased by 25% annually since 2017,” said Dr. Bawumia.