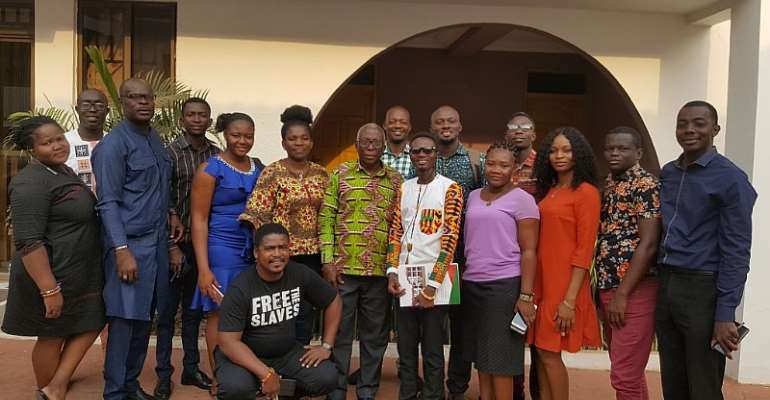 Joha Braimah and Bismark Quartey in a group photograph with participants

Some 13 selected journalists have received two-day training on how to report appropriately on issues related to human trafficking.

The training was organised by Free The Slaves (FTS), an international non-governmental organization (NGO), as part of its effort to help government combat the menace of human trafficking.

FTS focuses on issues related to trafficking of persons, particularly children, to farming, mining and fishing communities. Besides, it has formed partnerships with other local NGOs to raise public awareness and also support victims and other rescue efforts.

The Country Director of FTS, Joha Braimah, said the NGO had worked to free hundreds of victims, including children, along the fishing communities on the Volta Lake and other farming and mining communities.

He said through its collaboration with local partners including International Needs Ghana, Mission of Hope and Partners in Community Development Programme (PACODEP), it has been able to provide training for more than 2,000 community members, traditional authorities and other stakeholders on ways to combat child trafficking.

“The community leaders were trained on how to identify instances of child trafficking, take appropriate actions and help reintegrate rescued children into communities,” he added.

He said so far with the help of the police, the NGO had rescued 183 children and 14 adults from trafficking situations and provided all the victims with support services.

Bismark N. K. Quartey, Country Programme Manager of the NGO, speaking on “Trafficking in Person (TIP)” report for 2018 said there were still many victims, mostly children, engaged in 'slavery' within the fishing communities and there should be a collaborative effort to combat the crime.

“Although Ghana does not meet the minimum standards for the elimination of human trafficking, government's increased efforts in fighting against the menace resulted in Ghana's upgrade from a tier two watch list to a tier two ranking,” he said.