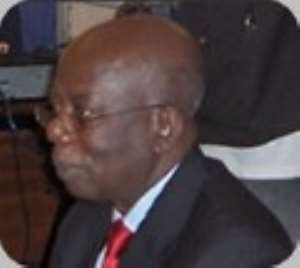 Chief of Staff and minister for Presidential Affairs, Kwadwo Mpiani on February 10, 2006 wrote a letter to the manager of GIA-USA, LLC in Salt Lake City, Utah stating the security take over of GIA offices.
Instructively a press briefing called by the chief of staff to explain his version of the truth, excluded critical media organizations of government but included top players of the famous self-styled coffee shop mafia and general secretary of the NPP, Nana Ohene Ntow.

His letter titled: GIAL SHAREHOLDER AGREEMENT: MANAGEMENT OF GIAL,” outlines his dissatisfaction with the 'manner in which the affairs of the airline was being handled and demanded an immediate amendment of the November 2004 shareholders agreement'.

Former Chief Executive of the Volta River Authority (VRA), Dr Charles Wereko Brobbey was at the briefing to explain issues to the coffee shop mafia. Mr Mpaini expressed concern: 'the letter and spirit of the shareholders' agreement anticipated that the management team led by Ralph Atkin would be in place for a reasonable but definitely not less than one year… therefore the agreement must be abrogated or at a minimum amended to reflect the existing conditions and circumstances'.

In the two- page letter, missing from the sheaf of documents passed onto senior journalists such as the managing editor of the Daily Guide, Gina Blay and Metro TV newspaper review host Randy Abbey amidst sumptuous meal and red wine at the Imperial Peking Chinese restaurant where the meals were promptly picked up, Mr Mpiani made a shuddering conclusion:

“We have concluded that your continued management role in GIAL is not tenable. The Board of Directors of GIAL SHALL APPOINT A NEW MANAGEMENT TEAM, which shall be answerable to the Board of Directors with immediate effect. The letter copied to Ralph Atkins and interestingly enough to Sammy Crabbe of Unger Oaks Consult.

Subsequently, reports by the rest of the media, including comments by Nana Ohene Ntow speak of aspects of management that include issues that are of a criminal nature including serious issues of conflict of interest.

Mr Crabbe acknowledged ownership of Unger Oaks, which has virtually all the 30 percent shares and also owns the Mary Greensalde Information Systems that has had a working professional relationship with GIA and has been known by the board and shareholders up front in earlier interviews with the Chronicle newspaper when the NPP Greater Accra raced to protest their boss, who was being thrown out of the office by the police.

Press reports relying on the Mpiani briefing lists some of these companies as targets for investigations as if they had never been known. What is withheld is that other board members, including the latest board installed by the Chief of Staff and which was subsequently asked to sack Brian Presbury, are already dealing with GIA without clearance from its board.

Andah and Andah Auditing is an accounting firm linked directly to board and management member Kojo Andah who gleefully agreed to serve on GIA, knowing fully well the implications. Mr Mpiani's letter received a swift and detailed response from GIA-USA LLC from US and also from Accra where reference was made to the legally binding shareholders agreement among other things. The letters from the lawyers dated February 10, 2006 was copied to the Attorney General, Commercial Division of the US Embassy and board chairman.

It stated: The services of the management team will not be terminated by the board of directors or shareholders without the unanimous vote of the shareholders.”
To register their disagreement, the stage was set last Tuesday for a protest march against Mr Mpiani by the rank and file of the Greater Accra branch of the NPP who see Mr Mpiani as a source of mass discontent within the party.

Mr Crabbe who had endeared himself to the party with his deployment of skills in building opportunities for employment for party men and giving them a listening ear, without prodding from him, resolved to confront Mpiani in a show of force. The showdown which was scheduled for Wednesday was temporarily suspended when party chairman Peter Mac Manu who had just returned from rousing engagements in London successfully talked them out of it.