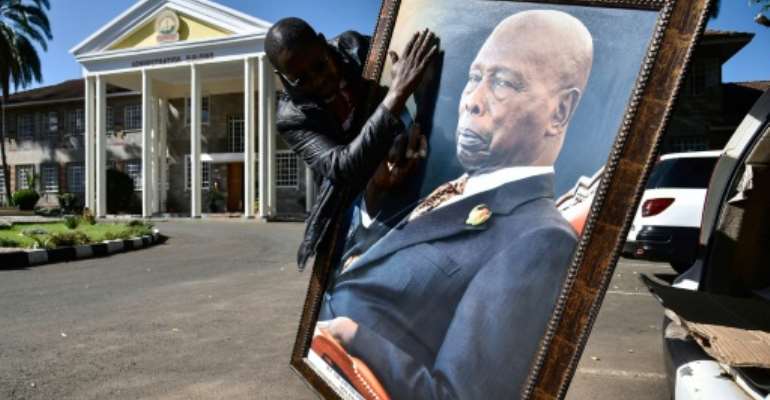 Daniel arap Moi, who towered over Kenya between 1978 and 2002, lay in state for three days in parliament, with tens of thousands of people filing past to pay their respects. By SULEIMAN MBATIAH (AFP/File)

Thousands of Kenyans on Tuesday gathered to mourn the country's longest serving leader, the hardline Daniel arap Moi, as a week of mourning climaxed with a state funeral.

Mourners began gathering at the stadium before dawn to pay their respects.

Moi, who towered over Kenya between 1978 and 2002, lay in state for three days in parliament, with tens of thousands of people filing past.

On Tuesday morning, he was taken on a gun carriage draped in Kenya's flag through the streets of Nairobi to the crowded Nyayo national stadium flanked by soldiers.

President Uhuru Kenyatta, who opened the memorial with the national anthem, has called Moi "a father of our nation, a champion of Pan-Africanism."

Shortly after, the cortege entered the stadium flanked by long lines of red-coated soldiers and a brass band playing marching tunes and Christian hymns, their shining boots glinting in the bright sun.

The body of the late president will be buried on Wednesday in his home area of Kabarak, 220 kilometres (135 miles) northwest of Nairobi.

The usually congested and noisy streets of Nairobi were quiet, with Tuesday declared a national holiday.

While those at the stadium had come to pay their respects to a ruler they revered, others in Kenya remembered a man that they had long feared.

Moi was however praised for keeping Kenya a relative haven of peace during a chaotic period in east Africa.