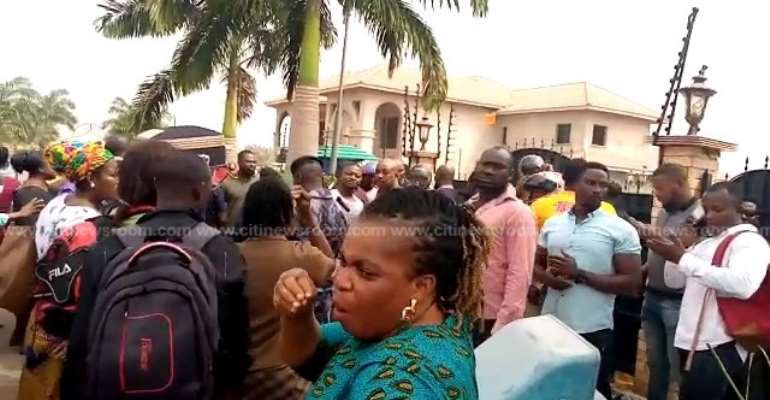 The Coalition of Aggrieved Customers of Menzgold Ghana has expressed its displeasure at the Ghana Police Service for refusing to approve their request to stage a planned walk in Accra today, Tuesday.

The customers had planned to present a petition to the Presidency after the walk in a bid to seek government’s intervention in retrieving their locked up investments from the collapsed company.

But after writing to the police to seek for permission and protection for the walk, a response letter signed by the Regional Commander for the Accra Region, DCOP Frederick Adu Anim indicated that: “…the Command is concentrating on the fight against robbery and other violent crimes as we enter the threshold of the year and as a result cannot accept any form of demonstration, picketing or walk during this period. The Command also wishes to remind you that you have already demonstrated on the same subject matter in less than six months and as such would not tolerate any further demonstration as other citizens must also have their interests served by the police”.

Reacting to this, a spokesperson for the customers, Francis Owusu on Eyewitness News on Monday said they were shocked by the response from the Police but however have no plans of disregarding the instruction, thereby halting the walk.

“We are really disappointed. We were going to present the petition [to the presidency] on Tuesday. Now that we have been served this notice from the police, we will be meeting and I believe we have other options. One of the options is to listen to them and find another time. We have also forwarded [the letter] to our lawyers for their advice,” he said.

He further pleaded on the government to consider their issue as a matter of national security and come to their aid in retrieving their locked up monies from Menzgold Ghana.

He added that, “We intend to petition the international community. Last week we also served our former respected presidents and we want to wait on them for their advice and counsel and certain notable leaders in our country– National Chief Imam, Peace Council. We have also petitioned the office of the First lady. We call on the state to take Menzgold issue as a national security issue and they should kindly and sleepily attend to us because what is happening to us is very serious.”

Following an order from the Securities and Exchange Commission (SEC) to suspend aspects of its operations in 2018, Menzgold has since been struggling to pay its customers their monies.

Management of the gold dealership firm, on December 27 2019, said close to 200 customers of the company had received their locked-up funds, a claim the customers disputed.

Due to this, the aggrieved customers have on several occasions partaken in demonstrations to churn out their demands to receive their monies from the company.