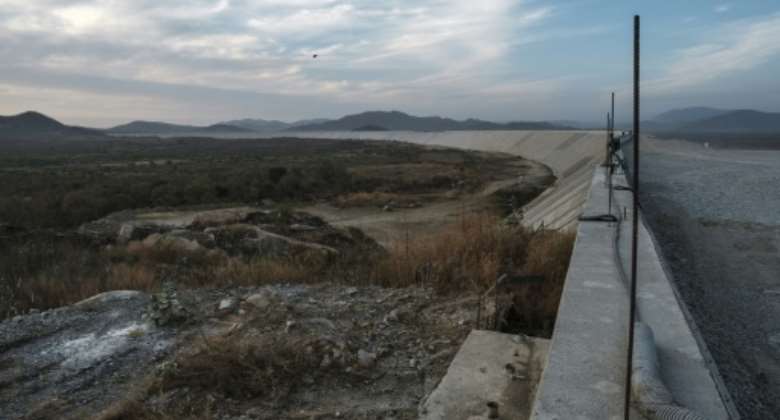 A general view in December 2019 of the Saddle Dam, part of the Grand Ethiopian Renaissance Dam mega-project that has triggered fears in Egypt. By EDUARDO SOTERAS (AFP/File)

The United States is optimistic Ethiopia is close to a deal with Egypt and Sudan on a controversial mega-dam, an official said Monday, ahead of a trip by Secretary of State Mike Pompeo.

Pompeo will visit Ethiopia as well as Senegal and Angola starting on Saturday on his first visit to sub-Saharan Africa since becoming the top US diplomat in April 2018.

Asked if Pompeo would seek to seal an accord in US-brokered talks on the dam, a senior US official said: "Hopefully that situation is close to resolution."

"Let's keep our fingers crossed and remain very optimistic," he said, adding that all three countries were friendly with Washington.

Egypt fears that the Grand Ethiopian Renaissance Dam, which will be the largest such project in Africa and double Ethiopia's electricity, will drain the Nile, on which the parched Arab state relies for 90 percent of its water.

Egypt sought the intervention of President Donald Trump over the $4.2 billion hydroelectric project, which Ethiopia hopes to start operating later this year.

Trump also tweeted last month after a phone call with Prime Minister Abiy Ahmed that he believed a deal was near, although the three nations pushed their deadline until the end of February, their latest delay.

Negotiators have appeared to make progress, with Ethiopia in a draft accord agreeing to fill the dam only during the rainy season and to base future water levels on the conditions of the Nile.

Mankessim: Kenkey seller knocked down by a speeding vehicle ...
29 minutes ago