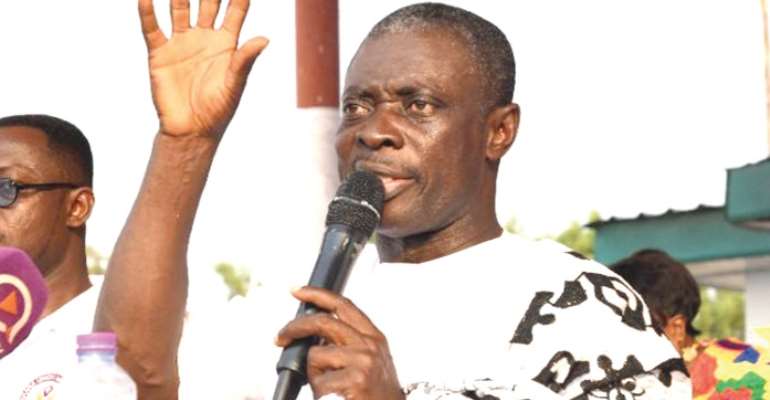 The Ghana Union Movement (GUM) has launched its manifesto for this year's general election with a promise to revisit the progressive policies of Ghana's first President, Dr Kwame Nkrumah.

Addressing about 1000 people who had gathered for the national launch of the manifesto in Accra, the Flag-bearer of GUM, Reverend Christian Kwabena Andrew, said the party's campaign for the 2020 general election would hinge primarily on industrialisation and job creation.

"We are coming to continue the great dream of Dr Nkrumah that has been abandoned for many years. We have good plans and good policies for a better future and it is a plan to make Ghana prosper and be great again," he stressed.

Industrialisation
To promote industrialisation, he said a GUM government would operate a duty-free port to facilitate trade for the local business community.

He said the party would also ensure that there was free power for local businesses to thrive.

"I want to assure all Ghanaians that the high cost of doing business at the port will be a thing of the past because there will be free port under a GUM government.

Also, electricity is essential to the growth of businesses so I will ensure that power is free for local businesses while expatriates will pay the appropriate rates for the power they consume," he stressed.

Education
The GUM flag-bearer said if the party was elected into office, there would be an immediate review of the current educational system to be centred on technical and vocational education and training (TVET) as a means to produce the human resource with the expertise to ensure sustainable development.

He said the current syllabi for basic, second-cycle as well as tertiary institutions had failed to prepare students to have the technical ability or critical thinking skills to address nagging development challenges.

Rev. Andrew said there would be an overhaul in the education architecture to eliminate the use of examination to measure the intellect of students.

"I want to stress here that the emphasis will be on skills acquisition instead of merely passing examination. In fact, certificates will not be the basis for appointment under a GUM government," he said.

Galamsey
Rev. Andrew said it was worrying that although Ghana had been blessed with abundant natural resources including gold, diamond, bauxite and manganese, those resources had been poorly managed by successive leaders.

Wading into the brouhaha surrounding the illegal mining menace, he said it was evident that the government had failed to deal with the canker.

He said the GUM would take bold steps to streamline the activities in the small-scale mining sector and give opportunities to all people to mine sustainably.

Welfare
The GUM flag-bearer said the party had a policy in place to provide monthly allowances for all persons who retire at age 60 to make life easier for them.

He also said a lifeline would be given to prisoners to be reunited with their families “when the GUM wins the election and forms a government.”

"People who are in prison, except those who committed murder, will be taken out and made to do community service for six months under supervision, after which they will be supported to start life afresh," he said.

He added that the GUM would prioritise community service over custodial sentence for convicts.

Deliver promises
The National Chairman of the party, Dr Maxwell Kofi Awuku, gave an assurance that they would deliver on all their promises if voted into power.