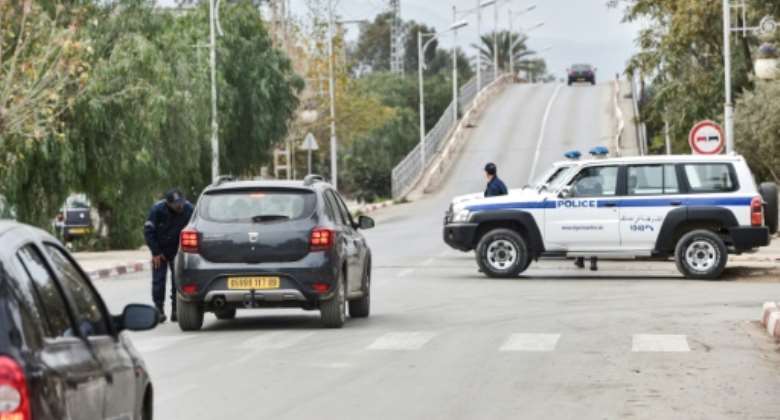 Police cars block access to a road near a courthouse in the Algerian city of Blida where an appeal hearing is underway in the trial of the brother of former president Abdelaziz Bouteflika and three other key figures. By RYAD KRAMDI (AFP)

Algeria's state prosecutor is seeking a 20-year jail term for the brother of former president Abdelaziz Bouteflika, lawyers said Monday, as he seeks to appeal a 15-year sentence.

The once mighty Said Bouteflika, 62, was long seen as the real power behind the presidency after his brother suffered a debilitating stroke in 2013.

He had served as a key presidential aide but was detained in May last year, a month after Bouteflika quit office weeks into mass protests against his bid for a fifth presidential term.

In September Said Bouteflika, along with several other senior regime officials, were sentenced by a military tribunal to 15 years in jail for "conspiring" against the state and undermining the army's authority.

A court in Blida, south of Algiers, began hearing an appeal against the sentence on Sunday behind closed doors and amid heavy security.

The deliberations continued on Monday, also behind closed doors, with the defence team presenting their arguments, according to defence attorney Farouk Kessentini.

Kessentini is representing General Mohamed Lamine Mediene, known as "Toufik", who for 25 years headed the powerful Department of Intelligence and Security, and was sentenced in September alongside the former president's brother.

Also in court were Mediene's former right-hand man, General Athmane "Bachir" Tartag, and Louisa Hanoune, who had served as secretary general of the left-wing Workers' Party.

The four defendants are accused of having met in March 2019 in a bid to derail plans by the army high command to force the departure of president Bouteflika.

Defence lawyers hope the four will be released after Algeria's balance of power shifted following the December 23 death of Gaid Salah at the age of 79.