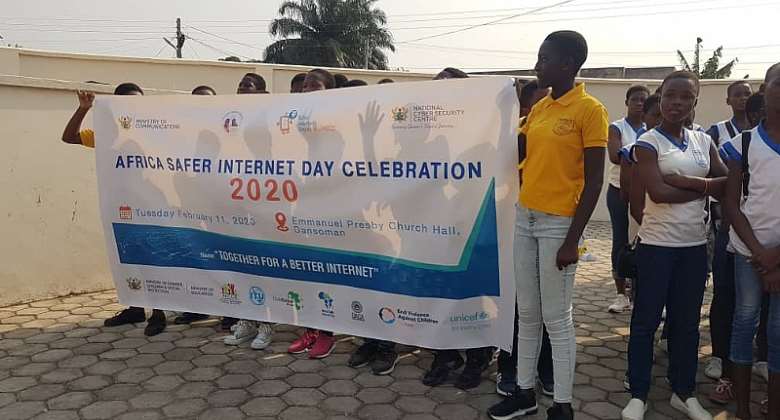 The National Cyber Security Centre (NCSC) through the Ministry of Communications has engaged over 300 shool children on a float in Ablekum West Municipal Assembly in Accra to commenced Africa Safer Internet Day.

The event which was on the theme: ‘TOGETHER FOR A BETTER INTERNET’ focused on Ghana’s National Cyber Security Awareness Program dubbed “Safer Digital Ghana”.

However, the celebration of the Africa Safer Internet Day (ASID) is expected to; Promote the safe and responsible use of internet especially by children and young people and also encourage a national conversation on online safety for children, which is in line with Ghana’s National Cyber Security Awareness Programme aimed at promoting “A Safer Digital Ghana”.

The celebration is also expected to contribute to a change in the mindset on the use of internet among children, young people, parents and educators and also educate children on the opportunity to engage with industry players to have a first-hand understanding on the use of the internet.

Mrs. Lawuratu Musah Saaka, lead, child online protection, national cybersecurity noted that the event is to make the internet a safer place for children by protecting them from cyber crimes and other abuses that may pose a danger to their future.

She said the children are the future of every nation therefore it is very important to ensure their safety and wellbeing.

"So many things are going on, on the internet and children are more vulnerable. Adult, teachers etc are vulnerable but the most vulnerable one is children. this event will teach them things to do and things not to do; so that they can get the best out of internet usage", she said.

The Municipal Chief Executive, Hon. George Bray, commended the ministry for championing such a laudable initiative, adding that it's of the nation's benefit.

He said internet education is very necessary because the internet has become very useful.

He advised the children to open their mind and be ready to learn everything been thought through the event because the internet is the future.

Over the years, Safer Internet Day (SID) has become a landmark event in the online safety calendar. Starting as an initiative of the EU SafeBorders project in 2004 and taken up by the Insafe network as one of its earliest actions in 2005, Safer Internet Day has grown beyond its traditional geographic zone and is now celebrated in approximately 150 countries worldwide.

Insafe is a European network of Safer Internet Centres (SICs). Every national Centre implements awareness and educational campaigns, runs a helpline, and works closely with youth to ensure an evidence-based, multi-stakeholder approach to creating a better internet.

Museveni apologises over son's Twitter rant on Kenya
52 minutes ago

Paramount Chief of Bunkpurugu commends Bawumia for his good ...
1 hour ago