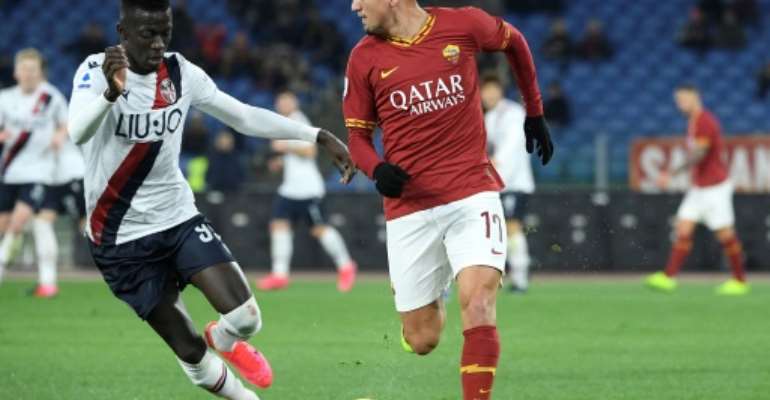 Gambian Musa Barrow was the star African performer in Europe at the weekend, scoring twice for Bologna in a 3-2 Serie A victory at Roma.

The 21-year-old forward is on loan from Champions League last-16 qualifiers Atalanta and valued at 13 million euros ($14,2 mn).

He stole the limelight as many African stars, including Liverpool duo Sadio Mane and Mohamed Salah, were enjoying mid-season breaks.

The Ivorian's fifth assist of the season for Christian Benteke was not enough to halt Crystal Palace's Premier League slide as the Eagles were beaten 3-1 at Everton. Palace have not won in eight games and remain six points above the relegation zone.

The Moroccan scored his first goal for Sevilla but could not prevent them slipping to a 2-1 defeat at struggling Celta Vigo in La Liga. En-Nesyri joined Sevilla from Leganes last month and put them ahead after racing clear and finishing in the 23rd minute.

The Gambian scored two excellent individual efforts either side of half-time to send Bologna on their way to a 3-2 victory over Roma. Barrow has scored three goals in four games since moving to Bologna, who climbed to seventh, just one point off the Europa League berths.

The Ivorian found the net for a second consecutive game with his 90th-minute header and also earned the penalty that gave Sassuolo their first goal in a 2-1 win at rock-bottom SPAL. Boga has scored seven league goals this season.

Ivory Coast midfielder Kessie set up AC Milan's second goal with his clever flick towards Zlatan Ibrahimovic allowing the Swede to head in against city rivals Inter Milan. But Milan let their two-goal advantage from the first half slip and fell 4-2 to drop to 10th.

The Moroccan was a handful on the right wing, but his Dortmund team leaked two late goals within 82 seconds to crash to a 4-3 defeat at Bayer Leverkusen. At 2-2 early in the second half, it was Hakimi's return pass that Jadon Sancho swept home for a superb strike, which was disallowed after the VAR spotted a push in the build up. However, the 21-year-old, on loan from Real Madrid for the rest of the season, set up Raphael Guerreiro, who fired home from a tight angle moments later to put Dortmund 3-2 up with 25 minutes left.

The 34-year-old former Ivory Coast striker is set to leave Hertha Berlin when his contract runs out in June, having sat out a 3-1 defeat at home to Mainz -- the fifth game in a row head coach Jurgen Klinsmann has left him out of the squad. After his contract expires, the former Chelsea forward says he would like to link up with former Blues team-mate John Terry, now assistant coach at Aston Villa, but would have difficulty getting a permit to play in England, so America could be an option.

Nigerian forward Victor Osimhen celebrated after scoring for Lille at Angers but was later injured. By JEAN-FRANCOIS MONIER (AFP/File)

The Nigerian striker continued his fine debut campaign in Ligue 1 with the opening goal as Lille won 2-0 at Angers to move to within a solitary point of the Champions League places. It was his 12th league goal of the season, but the 21-year-old's night ended when he was stretchered off in the second half with an apparent thigh injury.

The 28-year-old Ghanaian forward returned for a third spell in France last month when he joined Strasbourg from Porto on a loan deal that will be turned into a permanent transfer at the end of the season. He scored his first goal for his new club in a 1-0 win at Toulouse last midweek and followed that up by scoring again in a 3-0 win over Reims that left Strasbourg just outside the European places in France's top flight.

Bawumia calls for greater unity, cooperation between Muslims...
37 minutes ago