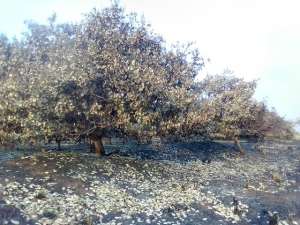 Data from the authorities in the Bono East region shows that more than 150 maize farms have been razed down as a result of bushfires.

The Municipal Chief Executive (MCE) for Atebubu Amantin, Edward Owusu, is not happy with the situation.

He urges farmers in the Bono East Region have been urged to protect the huge investment government has made in the Planting for Food and Jobs (PFJ) programme.

He made the appeal last Friday when the region launched an anti-bushfire campaign and also inaugurated fire volunteers brigade to guard against bushfires in the region.

Addressing farmers groups and other stakeholders in the agricultural industry, the MCE said Atebubu was the leading producer of maize in the country but fires were defeating the efforts of the farmers.

“One hundred and fifty (150) maize farms were destroyed last year alone by fire. Even the assembly itself lost some property, making it necessary to guard against it, especially bushfires,” he said.

He blamed most of the bushfires on activities of Fulani herdsmen and urged members of fire volunteers to make every effort to stem the tide of bushfires in the region.

The regional fire campaign was launched under the theme: “My Environment, My Life; Stop Bushfire Now!

The Bono East Regional Minister and Member of Parliament for Atebubu Amantin, Kofi Amoakohene, said it was necessary to sensitize the people to the devastating effects of bushfires due to the huge investment government continues to make in the agricultural sector, especially through PFJ.

“Government has invested heavily in PFJ and the Planting for Investment and Export so let's protect the farms. Let's protect forests and the vegetation cover because our lives depend on them,” he stressed.

He charged the regional fire command to start a serious anti-bushfire education campaign before the dry season sets in.

Mr. Amoakohene urged all assemblies in the region to enact by-laws on bushfire prevention and ensure their enforcement to protect government investment and public property.

The Regional Fire Commander, DO1 George Anim Frimpong, said due to the high incidence of bushfires, the municipality and the regional administration had to step up their efforts.

He blamed charcoal burners, palm-wine tappers and herdsmen as major culprits of bushfire and urged the brigade to closely monitor their activities.

“PNDC Law 229, 1999 gives the volunteers power to arrest anybody who sets fire to his or her farm without permission from the brigade,” he said.