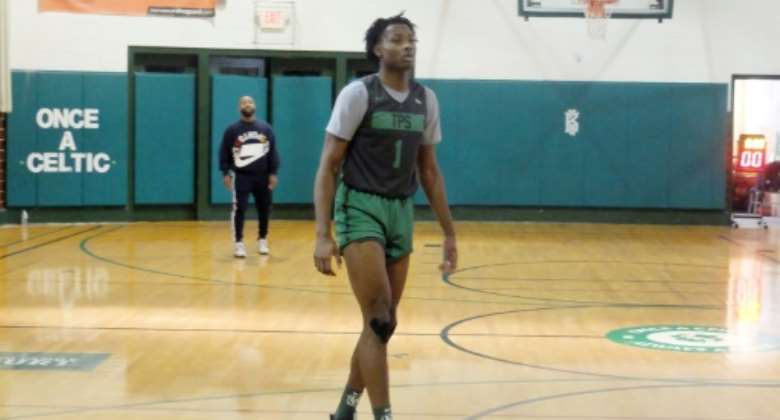 He will not finish high school until 2021, but Congolese teen Jonathan Kuminga is already considered by some to be the young player who most interests the NBA.

At 17, Kuminga waits for his moment in a small establishment in Hillside, New Jersey, 30km southwest of New York. He might be a millionaire in a matter of years, but for now, the 6-foot-6 (2.03m) playmaker spends most of his time in a modest red brick building, studying and training.

Chris Chavannes, who coaches Kuminga at noted prep program Patrick School, pointed out some of the obstacles facing the highly touted prospect in the number 1 jersey during a workout.

"He comes from a place where there was not as much talent and where it was not as intense, so he must integrate our demands, physical and mental," Chavannes said.

"But he loves basketball, so the transition will not be so difficult for him."

Kuminga has the frame, according to Al Harrington, who is among the few players to make the leap directly from high school to the NBA.

"Physically, he already has the body to play in university or in the NBA," Harrington said.

"It's very rare to see such a combination, a guy of his size able to dribble quickly and post himself" Chavannes added.

At ease with the ball and patient as plays develop, the young Congolese student can become fearsome in transition, although he is still working to perfect his shooting touch.

Since arriving in the United States from the Democratic Republic of Congo at age 13, Kuminga has had a chaotic journey, attending four high schools in as many years.

Several members of his family live nearby, but Kuminga has not seen his parents since departing his homeland.

"I am still a kid, so I miss them," said Kuminga, whose older brother, Joel Ntambwe, played US college basketball at Texas Tech University in Lubbock.

The cost of a trip back to Africa and a visa issue prevent a reunion with his parents or joining his homeland's national team, whose jersey he has never worn.

Nevertheless, with the 2021 AfroBasket tournament on the horizon he is on the radar of Congolese federation manager Joe Nkoi.

"We are following him closely," Nkoi said. "We give ourselves time."

Since last year, "Jon" has been considered a possible top pick in the 2022 NBA Draft, becoming eligible for the selection process one year after his high school class graduates.

"With his talent, he could be number one in the NBA draft," said his cousin, Utah Jazz star Emmanuel Mudiay, who is also from DR Congo.

While the NBA has discussed changing the rules to allow direct moves from the high school ranks to the NBA -- something unseen in 15 years -- any change is unlikely to come in time to prevent Kuminga from having to spend a year in college basketball.

"He has his feet on the ground so much that it makes everything very easy for him. He does not get distracted," Chavannes said.

And helping him stay on track, Patrick alumni like Harrington and Brooklyn Nets star Kyrie Irving sometimes drop by workouts and pass along advice.

"We foreigners who come from far away come with a goal," Mudiay said. "His is to go to the NBA."