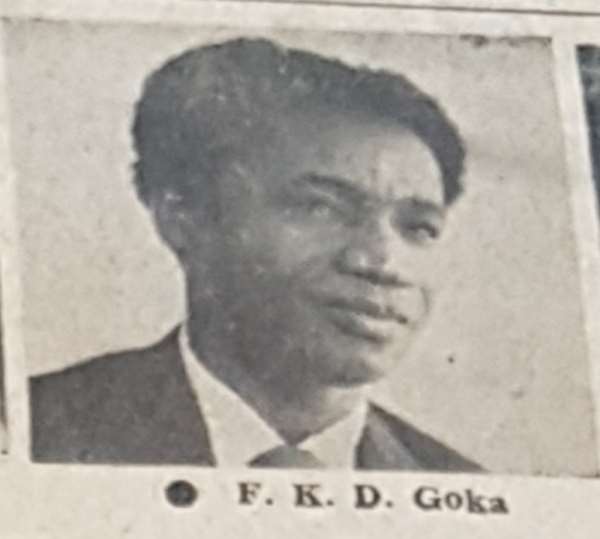 Known to be the brain behind the change of name from Trans Volta Togoland to Volta Region, Ferdinand Koblavi Dra Goka was a Ghanaian teacher and politician, who legitimately can be regarded as one of the best political figures in the First Republic.

Mr. Goka was born on the 7th day of November 1919 at Mafi Anfoe in the present-day Volta region.

He started his formal education at the Evangelical Presbyterian Church (E. P. C.) Middle School in Hohoe where he obtained his Cambridge School Certificate in 1941.

His next step in climbing the academic ladder was to study at the Akropong Presbyterian Training College from 1943 to 1944. He proceeded to the Ewe Presbyterian Theological Seminary at Ho and qualified as a catechist at the end of his study at Ho.

His early career was as a pupil-teacher in 1934 at Mafi Anfoe, his hometown. In January 1946, after obtaining his teacher's Certificate A, he took an appointment at the Keta Presbyterian Middle School. He left the classroom in June 1948 and took office as the Assistant Education Secretary of the Anlo-Tongu District Education Committee.

Mr. Goka went ahead to contest in the 1954 general elections in his pursuit to represent the people of Central Tongu in Ghana's Legislature. He contested and won the election on the ticket of Nkrumah's Convention People's Party and was in the same year appointed the Ministerial Secretary for the Ministry of Health.

In June 1959, he was made the Regional Commissioner for the Volta Region. When Ghana became a republic on 1st July 1960, he became the Minister for Trade.

On 8th May 1961, he became the second person in the history of Ghana to head the Ministry of Finance; he took over from Mr. Kormla Agbeli Gbedemah, Nkrumah's former left-hand man. Nkrumah's choice of Ewes to head certain sensitive ministries and departments in his government was believed to be due to the way the traditions and customs of the Ewes made them trustworthy, hardworking and very loyal.

Later that year, the Ministry of Trade and the Ministry of Finance were merged and Mr. Goka once again headed the newly merged ministry; he became the Minister for Trade and Finance on 1 October 1961. He worked in that capacity until he was replaced by Kwesi Amoako Atta in 1964. All this while, he was still a Member of Parliament, a position he held from 1954 till the overthrow of Nkrumah's government in a CIA planned coup on 24th February 1966. He retired from active politics after the coup.

Under the Commissions of Enquiry Act, 1964 (Act 250) and N.L.C Investigation and Forfeiture of Assets Decree 72, the government appointed the Jiagge Commission to enquire into the assets of specified persons who served under the ousted Nkrumah regime. Mr. Goka happened to be one of those persons.

In May 1969, Reports of the Jiagge Commission accused Mr. Goka of financial misconduct during the Nkrumah regime.

The government of the day accepted the Jiagge Report and in that regard intended to confiscate some properties owned by Mr. Goka. His Mawuli House at Adidome and a new commercial building also at Adidome, which were valued at £ 13, 160 at the time, were to be confiscated.

Chieftaincy conflict in Yong-Dakpemyili leaves man with two ...
44 minutes ago