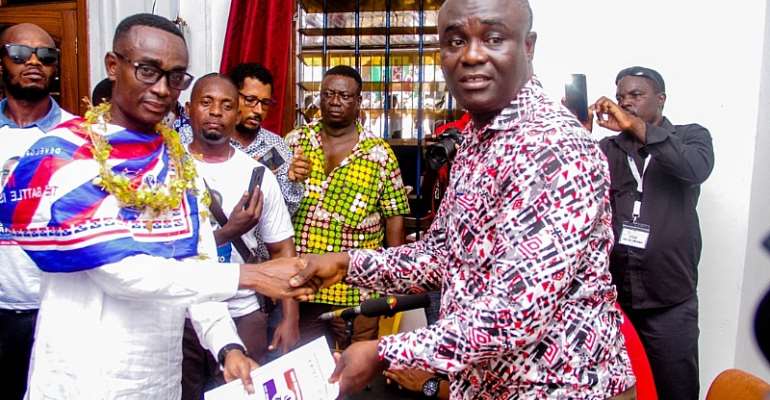 Should the party’s Vetting Committee approves Joseph Gerald Nii Tetteh Nyanyofio to contest the primaries on April 25, he would go toe-to-toe with the incumbent Member of Parliament for the area, Hon. Vincent Sowah Odotei, who is also a Deputy Minister for Communications.

Speaking to ModernGhana after picking the form, Joseph Gerald Nii Tetteh Nyanyofio said he was ignited by the many calls from the youth in the constituency who believes he has what it takes to bring back La Dadekotopon to its glory days.

Joseph Gerald Nyanyofio who has been at the forefront of youth leadership in La Dadekotopon since his early life in the 90s says he strongly understands the major problem of the constituents as an indigene, something he said the incumbent MP has failed to come into terms with, let alone to address them.

Joseph Gerald Nyanyofio who was a member of La Youth Clubs Association (LAYOCA) which championed various developmental agenda in the community promised to bring those expertise to bear.

He calls on the support of the people to kick out the incumbent MP to afford him the mandate to initiate more developmental projects in the area.

He promised to work with the chiefs and elders of La Dadekotopon by galavanising their support to promote unity of purpose for all persons through strong collaboration.

Joseph Gerald Nyanyofio has promised to run a smooth campaign devoid of any form of bickering and acrimony.

He urges his opponents to put their supporters to order ahead of the elections inorder to avoid any smear campaign that has the tendency to destroy the image of the party.

The Journey so far…

At the local level, Joseph Gerald Nyanyofio has been at the forefront of youth leadership in La Dadekotopon since his early life in the 90s. He was a member of La Youth Clubs Association (LAYOCA) which championed various developmental agenda in the community. He is also a member of the; La Citizens Network (LACNET), Coalition of La Youth Associations (COLA), Sgt. Adjetey Memorial Alewolon Quiz Competition, and the La GaDangme Association that championed an aggressive Clean-Up Campaign and advocated with countless petitions to the then President JA Kufuor’s government for the expeditious rehabilitation of the Old La Market Project. He is known widely in GaDangme Association circles both locally and nationally.

At a tender age, Gerald had formed his opinion about his political philosophy which coincides with the vision of the New Patriotic Party. Thus, he has been a card-bearing member and has been working behind the scenes as a party activist over all these years. Notable among his political activities are his role as an Advisor to the Tertiary Education Students Confederacy (TESCON) of the NPP at the University of Professional Studies, Accra and his regular financial support to the party.

As president of Ga Dangme Students Association at the University of Ghana, he assisted in the formulation and implementation of several development projects including the Annual Rural Outreach Project, King Tackie Tawiah and Nene Azu Mate-Kole Memorial Lectures and the GaDangme Annual Durbar, among others, in the University.

He has assisted hundreds of La and Ghanaian Youths to gain admission into various Universities in Ghana and beyond. He has also tutored, mentored and empowered several Ghanaian youths through basic to tertiary levels and has transformed a lot more into entrepreneurs today. He is respected across both sections of the political divide in La due to his voluntary spirit, self-sacrifice and above all, his passion for peace-building and the development of his people. He is a unifier and his influence transcends his relational space. He has built a wide array of networks in academia, industry and other development partners which he can leverage to bring hope to the youth of La and the Ghanaian society as a whole. He comes along with a wealth of academic and practical knowledge in public sector management and developmental issues which places him on a high pedestal to lead the people of the area into their aspiration.

Joseph Gerald Nii Tetteh Nyanyofio, an indigene of La, a suburb of Accra, the capital city of Ghana, was raised by his late father; Emmanuel Nyanyofio Addo from Nii Nyanyo Abentia We of the Abafum Quarter and his mother, Mary Akuokor Nai of Nii Nai Ashiamah We of the Abese Quarter. His paternal grandparents were Edward Sampson Addo Sowah ( aka Addo Kukurantumi), late Abafum Akutso Otseame, grandson of Nyanyo Tse Kwei, late Chief of Abafum Quarter and Kai Ozo of the Agbawe Quarter.

His maternal grandparents were Nii Nai Doku of Nii Nai Ashiamah We and Hannah Adjeley Kumah of Nii Adjei Osabu We- La Dzras33.

His main areas of expertise and interest are in the field of Public Sector Policy Management, driving accelerated change in complex public sector organizations as well as business environments. Prior to joining academia, he worked on contract as a Sales Executive Officer with the Standard Chartered Bank, Ghana for four (4) years, where he remained on top of his responsibilities and provided banking solutions to individuals and a host of reputable corporate establishments. He rose to the position of Sales Executive Team Manager prior to his resignation for a career in academia.

As a lecturer, he has been responsible for equipping students with knowledge for both public and private sector careers, as well as in academic research. He does this by bringing both his academic and professional experiences to bear on his teaching and research activities. He excels on the job, primarily as a result of a sincere commitment and passion to help all caliber of students to increase their potentials in diverse areas of academic life.

In 2016, he was appointed as the Coordinator for Management Programmes at the School of Graduate Studies, UPSA, where he has been responsible for driving the design and delivery of academic programmes to ensure consistency with the overall programme philosophy, objectives and outcomes in order to develop quality graduates.

The New Patriotic Party has slated April 25, 2020, to elect the remainder of its Parliamentary candidates.

It will also be holding its Presidential Primaries on the same day. The party has already held primaries for constituencies that do not have sitting Members of Parliament.

They also indicated that “all aspiring parliamentary candidates other than the sitting Members of Parliament will pay a Party Development Fee of GH¢30,000.”

Find below photos and video: