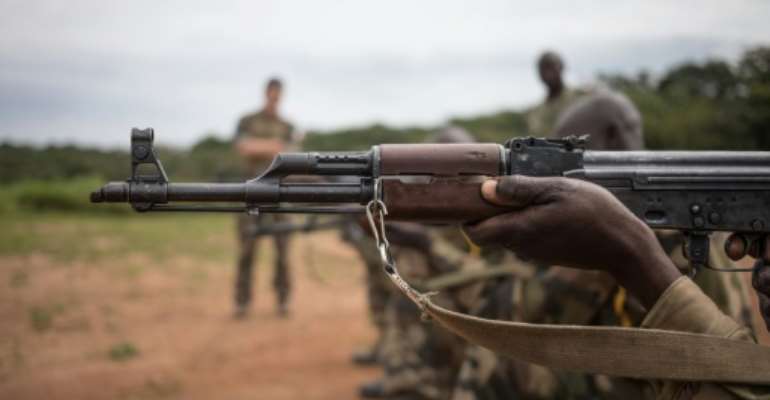 The two-dayÂ summit has taken as its theme "Silencing the Guns", yet AU officials are well aware of their failure to achieve the goal adopted in 2013 of ending "all wars in Africa by 2020". By FLORENT VERGNES (AFP/File)

African heads of state gather Sunday at the headquarters of the African Union for a summit meeting due to focus on how the body can play a more prominent role in resolving conflicts proliferating across the continent.

The two-day summit has taken as its theme "Silencing the Guns", yet AU officials are well aware of their failure to achieve the goal adopted in 2013 of ending "all wars in Africa by 2020".

In remarks to African foreign ministers ahead of the summit, AU Commission Chairman Moussa Faki Mahamat painted a bleak picture of the continent's security situation, citing extremist threats stretching from the Sahel to Somalia.

The "missed deadline" to silence the guns, he said, "reveals the complexity of the security situation in Africa."

The focus on conflicts this year marks a departure from multiple years of summits dedicated to reforming the AU -- including its funding structure -- and the implementation of a continent-wide free trade area.

There are multiple hot spots to choose from.

Though some progress has been made recently in Central African Republic and Sudan, long-running conflicts in places like Libya and South Sudan have been joined by new crises from Cameroon to Mozambique.

South African President Cyril Ramaphosa, who will take over from Egyptian President Abdel Fattah al-Sisi as AU chair, appears attuned to these challenges.

In a speech to South Africa-based diplomats in late January, he warned that conflict "continues to hamper" development.

The AU "must be more proactive" in responding to conflicts instead of leaving the job to outside powers, Naledi Pandor, South Africa's international relations minister, told AFP.

"The fact that anyone can step in means a gap has been allowed by us, and so I think we have to act faster, be more responsive when matters are affecting our continent," she said.

For his part, Faki encouraged a focus on "root causes" of conflicts and urged African leaders to pursue "innovative solutions that put the military solution into perspective by combining it with measures from other areas, notably development."

The AU will have to overcome internal disputes and insufficient financing for peacekeeping missions if it wants to become a major player in conflict resolution.

One priority for Ramaphosa is to have the AU play a bigger role in Libya-related peace processes, which have been led primarily by the UN.

A spokeswoman for Faki complained last month that the AU "has consistently been ignored" on Libya.

But the AU's attempts to assert itself have been undermined by its own divisions.

A source from Niger recently explained that the AU remains split on Libya, saying that Egypt, for example, doesn't want the AU to get involved -- a claim Cairo disputes.

The AU will also need to convince Europe, which is following Libya closely given its proximity to the conflict, to give it room to operate.

UN Secretary General Antonio Guterres said during a news conference at the AU on Saturday that he understood the AU's "frustration" at having "been put aside" when it comes to Libya, and endorsed a more influential role for the body going forward.

In a report released Friday, the International Crisis Group think-tank said the AU should prioritise the finalisation of an agreement that would see the UN finance 75 percent of peacekeeping missions backed by the UN Security Council.

"While the AU is willing and able to mount the type of counterterrorism and peace enforcement missions now regularly needed to help stabilise African countries, it lacks the financial resources necessary to provide them steady and predictable support -- something the UN can offer," the report said.