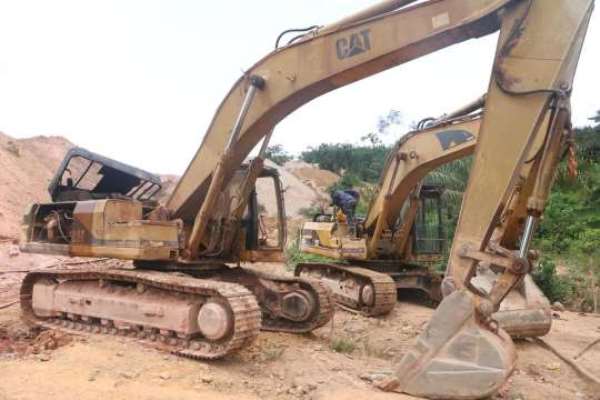 The government of President Akufo-Addo must not give up the fight against illegal gold mining - and other environmental crimes such as illegal logging and illegal sandwinning. The vast majority of Ghanaians recognise the difficulties involved in the fight against those destroying what is left of our natural heritage - and are appreciative of the fact that that menace is being confronted by the present administration.

Whatever mistakes might have been made in fighting those gang-raping Mother Nature, the fact still remains that many ordinary people across Ghana are indeed glad that they have a President willing to take on those perpetrating such illegalities - because they recognise that those destroying the Ghanaian countryside are in effect ruining our quality of life as a people: and lowering living standards for both present and future generations, on top of that too.

It will be highly irresponsible on the part of our current leaders to give up this crucial fight to protect what is left of our nation's natural capital, simply because the allegations of corruption amongst some of those involved in the effort to halt illegal gold mining, is proving politically embarrassing for a ruling party campaigning to retain power, in upcoming presidential and parliamentary elections.

That is why it is so important that President Akufo-Addo ignores the defeatist advice of those in his party who want an end to the fight against illegal gold mining (and against those who are also now busy destroying vast swathes of the Ghanaian countryside, through illegal logging and illegal sandwinning) - because of the shocking revelations of a number of seized excavators being sold unlawfully, and allegations of bribe-taking, by some of those appointed to help stop illegal gold mining across the country.

Loss of face for that reason, is no reason to end the fight against those destroying the natural environment in Ghana. Perhaps the time has now come to recognise this clear and present danger for what it actually is: a national security threat: and remove the socio-economic factors driving many rural communities to collaborate with illegal gold miners, illegal loggers and illegal sandwinners.

Transition green economy opportunities that could be quickly scaled-up, such as the production of coirfibre products from newly-established coconut plantations, must be made available to rural communities across Ghana.

Ditto the widespread establishment of industrial hemp plantations, and development of ecotourism destinations anchored on forest reserves transformed into national parks. Twenty-year tax holidays for such transition green economy ventures will attract small-scale gold miners, for sure. The government of President Akufo-Addo should not give up the fight against illegal gold mining - it must fight smarter instead.