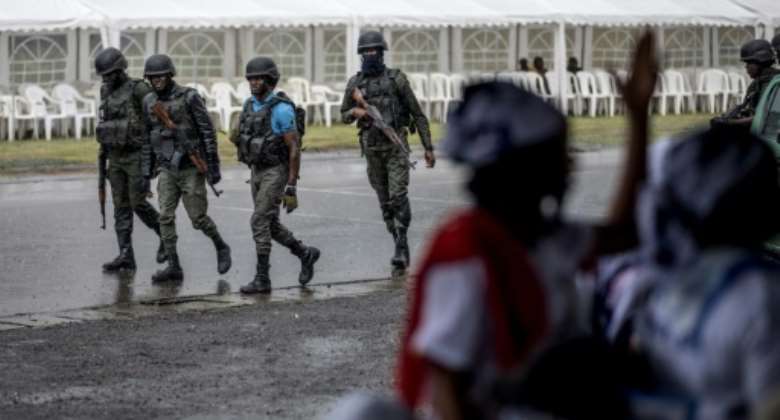 Security has been stepped up in the troubled anglophone regions ahead of Sunday's twice-postponed vote. By MARCO LONGARI (AFP/File)

Long-delayed elections are due to take place in Cameroon on Sunday, but in the country's violence-torn English-speaking areas, the fear is almost palpable.

"Everyone is holed up at home," a civil servant said in Buea, capital of the Southwest Region, one of two provinces gripped by bloody separatist violence.

Ahead of polling, the streets were empty except for heavily-armed military patrols; shops and homes were shuttered; and many people were tight-lipped -- "there's fear of reprisals," taxi driver Derrick Mbua said.

The elections, to renew Cameroon's legislature and local councils, should have been held in 2017 but were twice postponed.

Their credibility has already been dented by a boycott by the country's biggest opposition party.

Its leader Maurice Kamto spent nine months in jail after contested presidential elections in 2018 won by Paul Biya, who has ruled Cameroon for 37 of his 86 years.

But Sunday's vote also faces a mighty security challenge in the Northwest and Southwest Regions.

They are home to Cameroon's anglophones, who account for around four million of the 23 million population in this mainly French-speaking country -- their presence is a legacy of decolonisation in the late 1950s.

Decades of anger at perceived discrimination, and refusal by the central government to meet demands for autonomy, triggered a separatist movement which declared independence in 2017.

Bitter fighting has claimed more than 3,000 lives and nearly 700,000 people have fled their homes, according to NGO estimates.

Tensions have escalated in the runup to the vote, which the separatists have vowed to block.

In the 2018 presidential elections, the turnout in these two regions was just five percent.

Hundreds of troops have been sent to reinforce the troubled regions.

Police and army roadblocks dot the main highway in Buea, and commandos in balaclavas patrol aboard trucks armed with machine guns or in armoured vehicles.

Amnesty International on Thursday said 14 people were killed in an army attack on the village of Ndoh, in the Southwest Region, on January 23, a day after reports of a killing of a soldier in the area.

More than 50 homes in the region were set ablaze, it said.

"The security measures and increased military presence announced by the Cameroonian government to ensure this weekend's vote can take place, appear to have been a pretext for a much more sinister operation," the watchdog's specialist for the Lake Chad region, Fabien Offner, said.

"(...) Brutal military operations have been conducted while crimes committed by armed separatists continue unabated. Civilians are finding themselves trapped in a spiral of violence."

The RDPC is the only party that is campaigning visibly in the two regions, but its presence is low-key.

Cameroon's other large opposition party is the Social Democratic Front (SDF), which traditionally draws its support from the anglophone areas.

Prime Minister Joseph Dion Ngute addressed a rally of several hundred supporters in Buea on Thursday, which took place behind a thicket of armed troops.

Torched: Vehicles at Buea bus terminal after clashes in July 2018. By - (AFP)

He said the government had acknowledged anglophone grievances by giving the two regions a special status, the outcome of a "national dialogue" last year.

The forum was boycotted by the separatists and they dismissed its decisions.

"We are going to have to wait for the changes to have an impact on daily life for people to step back from the separatists," said James Fotabong, a Buea businessman.

Many residents said they would not bother to cast their ballot and were dismissive of voting for representatives who were unable to restore peace.

"I won't go out to vote," said Francis Mukwele, the manager of a dry-cleaning store. "And I can't imagine that people will go out to vote here in Buea -- I don't even know where I've put my voter's card."