‘Climate crisis is not for whites only’--Ugandan youth activist 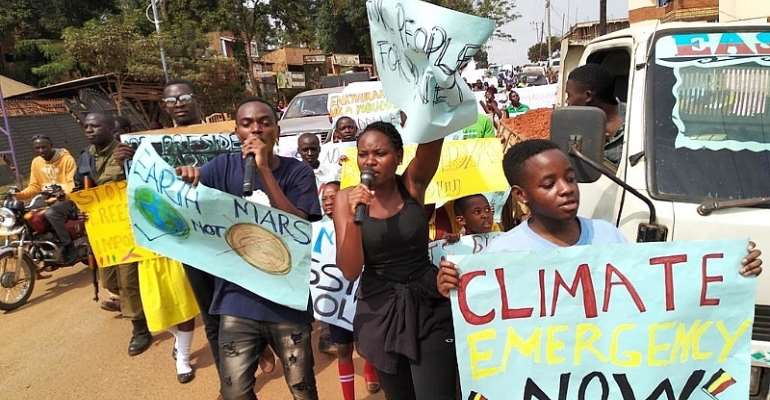 As she does every Friday, Hilda Flavia Nakabuye will skip university on 7 February to demand greater action on climate change.

When she first began protesting in 2017, she knew little about global warming. “It's not taught in schools,” she explains. What she did know however were the high temperatures, heavy rainfall and strong winds that had destroyed what was once her family's farm.

“We couldn't keep up the livestock farming and my parents had to sell most of their property,” she told RFI. When the money ran out, Nakabuye was forced to miss three months of school, unable to meet the tuition fees.

Today, she misses classes to raise climate awareness. And it's no easy feat.

"It's very hard to get people to know about it because most of them are hearing about climate change for the first time.”

That hasn't stopped them from being hit by climate change, with Uganda facing deadly floods and worsening food and water insecurity.

Saving Lake Victoria
Yet persuading people to push for climate action is difficult.

“People cannot go out freely like in Europe or in other parts of the country. It's different in Africa and particularly in Uganda. It's always the government to decide what people should or shouldn't be doing.”

Instead, 22-year-old Nakabuye has gone out to villages and schools to teach communities about how to adapt to climate change. One of her environmental concerns is saving Lake Victoria, which connects Uganda to Kenya and Tanzania.

In recent years, the source of the River Nile has steadily retreated from its former shores, leaving residents high and dry.

“It is undergoing so much pressure from massive dumping of plastic and biodegradable waste and there are also other practices like sand mining which are not controlled, so the waters are changing colour and they're becoming filthy,” comments Nakabuye, who every weekend takes a boat out on the lake to clean it up.

“There is massive pollution that is going on around the area already.”

When the drilling project begins later this year, Nakabuye fears that hundreds of Ugandans will be forced out of their homes to make room for the 1,443 km pipeline that will pass through Kampala to Dar es Salam.

Determined to force the government to see global warming as a priority, Nakabuye founded Fridays For Future Uganda in February 2019, inspired by the youth-led movement's Swedish founder Greta Thunberg.

While the world has been mesmerized by the power and charisma of the 17-year-old climate activist in spurring those in power to take drastic steps to save humanity's future, Nakabuye insists that African voices also matter.

“The debate on climate change is not for whites only,” she said on the sidelines of a discussion at the French foreign ministry last week to reflect on the climate crisis.

“It's all our responsibility. Africans do not deserve to suffer a crisis we never created.”

Lack of diversity
Nakabuye was speaking amid furor over minority representation, after another Ugandan climate activist called Vanessa Nakate was cropped out of a photo taken at the World Economic Forum in Davos. Her absence meant the image showed only white activists, including 17-year-old Thunberg.

“I don't understand why the media would crop out someone from a photo if they were in the photo,” Nakabuye commented, denouncing another form of “environmental racism and discrimination.”

Authors of the photo, the Associated Press has since apologized for a “terrible mistake” and the incident has sparked hopes of a watershed moment for climate activism and how it's reported.

For Hilda, it will mean hearing the perspectives of the people at the forefront of the climate breakdown. That was her message in Paris at the fifth edition of the Night of Ideas (Nuit des Idées).

“I left my comfort zone to come and speak here and share my ideas with people in the global north. That means that if we are to tackle climate change, we all have to leave our comfort zones and go where we are not comfortable.”