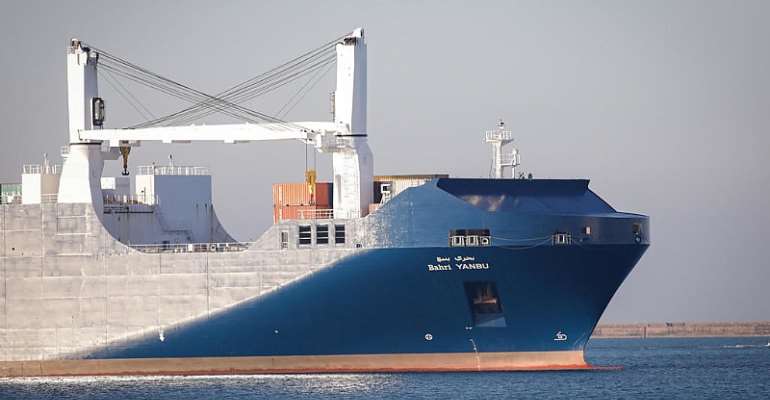 A Saudi registered vessel, the Bahri Yanbu, left the French port of Cherbourg, continuing a trip that activists say will bring arms to Saudi Arabia. Seventeen NGO's wrote a letter to French Prime Minister Edouard Philippe demanding guarantees that the ship does not carry arms that may be used in Riyadh's war against Yemen.

On February 6, some 100 activists protested at the port of Cherbourg against the suspected arms transport.

“We cannot say for sure if anything was brought on board this time,” says Tony Fontin of the French arms traficking watchdog Armaments Observatory, one of the 17 signatories to the letter, contacted by RFI

But a sister ship of the Bahri Yanbu, the Bahri Jazan, also run by Saudi Arabia's national transport company Bahri, was found to have transported French Ceasar artillery, a 155 mm/52 calibre self-propelled system mounted on a truck and built by French arms manufacturer Nexter, to Saudi Arabia earlier last year.

In April 2019, the investigative media outlet Disclose, in cooperation with Franco-German tv station Arte and French radio station France Info, revealed that the UAE and Saudi Arabia had deployed French weaponry against Huthi rebels in Yemen.

'Yemen Papers'
Disclose based its statements on leaked government papers, showing that France committed to sell 129 between 2018 and 2023. It documented the delivery of one such shipment from the French port city of Le Havre to the Saudi port of Jeddah, 19 days later.

The revelations, known as the “Yemen Papers,” led to three of Disclose staff being questioned by the French government, but also to a general awareness of France's weapon exports.

But French authorities have insisted there is no proof that civilians are being targeted by Riyadh, one of the biggest purchasers of French military equipment in the Middle East.

French arms exports jumped by 31.4% to 9.12 billion euro billion in 2018, an increase on 2017's 6.94 billion Euro in 2017, according to Jane's, the authoritative arms industry magazine, which said that The Middle East accounted for about 50% of the total market share for French defence orders.

According to the global arms transfer database of the Stockholm International Peace Research Institute (Sipri), France sold for 733 million USD weaponry to Saudi Arabia between 2014-2018, the UK for 2,7 billion USD, while the US topped the list with 11,5 billion.

Last May, President Emmanuel Macron defended the sales to Saudi Arabia, which he called a key ally in the fight against terrorism.

“We want this control in France, to have more transparency, and to set up a parliamentary committee to monitor arms export,” he says.

The NGO's did not yet get any reaction on their letter to the Prime Minister.

Bilbao
The Bahri Yanbu arrived in Cherbourg after it called at Bremerhaven in Germany, and Sheerness in the UK after it came from Canada and the US.

Ship tracking sites indicate that the ship is underway to the Spanish port city of Bilbao, where it is estimated to arrive on Sunday February 9 at around 17:00.

According to the site of the ship's owner, Bahri.sa, the ship will then continue to Genova in Italy, cross the Mediterranean to call at Alexandria in Egypt and reach the Saudi port of Jeddah via Port Said.