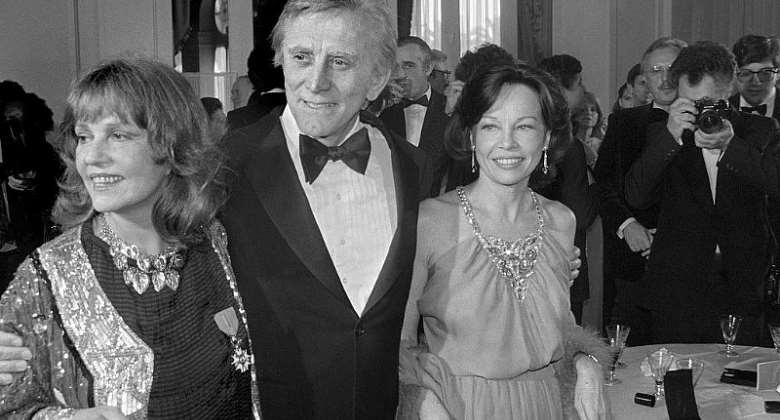 Actor Kirk Douglas died on Wednesday at the age of 103. Best known for his roles as Spartacus and Van Gogh, the cleft-chinned movie star was a confirmed francophile, declaring “people here like me more than in the United States”.

Douglas made more than 70 movies in a career that stretched across seven decades. Films such as "Spartacus" and "The Vikings" made him one of the biggest box-office stars of the 1950s and '60s.

He regularly came to France but regretted that he had acted in only two French films, notably Paris brule-t-il? (Is Paris burning?) by René Clément.

In an interview in 1978 he confessed he dreamt of being directed by the likes of Claude Lelouch, François Truffaut and Claude Sautet.

“They have a lot of talent. I love the way they work. It gives me the impression that it's easier. You take an idea, and work together. You don't feel obliged to do something huge to and have to earn millions to pay for it. I'd like to make a film with a good director and stay in France for eight, ten or so weeks for the shoot.”

In the same interview he said he'd enjoyed working on Spartacus but also smaller films like Kubrick's Path of Glory.

“We often do films to make money, it's important because everyone has to earn a living, but I think it's possible to make artistic films and also to make films for money.”

Douglas spoke fluent French and began learning the language after starring in Act of Love by Anatole Litvakin, a romantic film set in Paris.

He met Anne Buydens, his future, second, wife during the making of that film and they married in 1954.

Buydens, a film publicist, was a French-speaking Belgian and reinforced Douglas's attachment to France and the French language.

Like many a Hollywood star, Douglas was drawn to France through the Cannes Film Festival.

“When he arrived on the Riviera, life was beautiful,” Gilles Jacob, former president of the festival, told Le Parisien. "Living in a palace free of charge, playing in the Casino, being the darling of so many women, he got a very warm welcome!"

Douglas sat on the Cannes jury twice: the first time in 1970, the second in 1980 as President. He had to choose between All that Jazz by America's Bob Foss and Kagemusha - l'ombre du Guerrier by Japan's Akira Kurosawa.

“Douglas preferred Bob Fosse and got up to announce the good news on the phone. But the jury didn't agree,” explained Jacob. “So he left the discussion table and went to his room at the Hotel du Cap. No one saw him until Robert Favre Le Bret [the festival's general delegate at the time] suggested an ex-aequo.”

In a TV interview in Cannes in 1970 he told journalist France Roche he didn't enjoy being on the jury.

“I like watching the films, but suddenly I realise it's my job to judge the others and I don't enjoy that. It's difficult. I think it would be better if there weren't prizes.”

He made frequent appearances on French television to talk about his Hollywood career.

In 1989 he made a memorable appearance on the top literary chat show Apostrophes with Bernard Pivot. He'd come to talk about his memoirs and the conversation turned to his role as Van Gogh in Lust for Life, for which he won a Golden Globe.

“I almost lost myself in the character,” he told Pivot.

He related a now-famous anecdote about actor John Wayne, star of many a western.

“John Wayne told me I had to be macho. But I replied that as an actor you can play every role. John Wayne was angry.”

He also revealed his fighting side. When the French advertising guru Jacques Séguéla contested his iconic status, the actor cut him down to size.

“Who are you to judge what makes a star?”
In 1980 France awarded Kirk Douglas a César d'honneur and Légion d'Honneur. It mattered to him. Three times an Oscar nominee (“Champion” (1949), “The Bad and the Beautiful” (1952) “Lust for Life”), his only Academy Award was in 1996 when he received a lifetime Oscar.

Douglas also played a major role in breaking the Hollywood blacklist - actors, directors and writers who were shunned professionally because of links to the communist movement in the 1950s. He had always been close to the Democrats and was not afraid of hiring a blacklisted screenwriter.

He said he was more proud of that than any film he had made.

“Because of my straight-talking, I was the most detested actor in Hollywood for a long time,” he declared.

But he remained respected and popular in France throughout.

Speaking in Deauville film festival in 1999 he raised eyebrows by calling Stanley Kubrick's Eyes Wide Shut as “not even sexy!”

It was also at Deauville he seduced the French once and for all: “France is my second country. People here love me more than in the United States.”