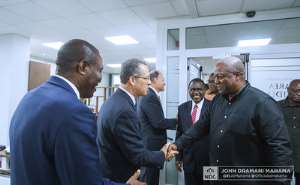 The flagbearer of the opposition National Democratic Congress (NDC), John Dramani Mahama, on Thursday visited The Church of Jesus Christ of Latter-Day Saints in Accra.

The interaction with the Africa West Area Presidency of the Latter-Day Saints Church is part of the ongoing consultative meetings Mr. Mahama and the NDC are holding with various groupings and stakeholders ahead of the 2020 general elections.

Received by the President of the Africa West Area of the Church, Marcus B Nash, assisted by First Counselor Edward Dube and Second Counselor Hugo E. Martinez, former President Mahama commended the Church of Jesus Christ of Latter-Day Saints for their missionary work and the widespread humanitarian services they have been providing to many communities.

Discussions centred on information about the Church, the need for peace ahead of the elections, curbing vigilantism, the handling of the financial sector challenges and its resultant job losses, and the reasons why the NDC and other parties are opposed to the compilation of a new voter register.

According to President Mahama ”data is not something that you discard. When you have data, it is useful. You keep upgrading and adding up to it. We used the same register in 2016, it worked perfectly, the President won based on the same register. Why do you want to change it? First it was about the hardware, it was unserviceable and will cost us too much to replace the hardware. Then next it was about the data itself, there were too many dead people on the register, etc. You just can’t see where the argument sits”.

On why the NDC decided to visit the Church, Mr. Mahama said ”we are consulting with key stakeholders. We’ve met many religious groups… and we said the Church of Jesus Christ of Latter-Day Saints is a key stakeholder when it comes to the religious community and we must come and interact and share our thoughts and hear from you”.

The NDC leader was accompanied by National Chairman Samuel Ofosu Ampofo, a National Vice Chairperson Sherry Ayittey, MP for Ho West and Chairman of the Parliamentary Christian Fellowship Emmanuel Bedzrah and other members of the NDC.