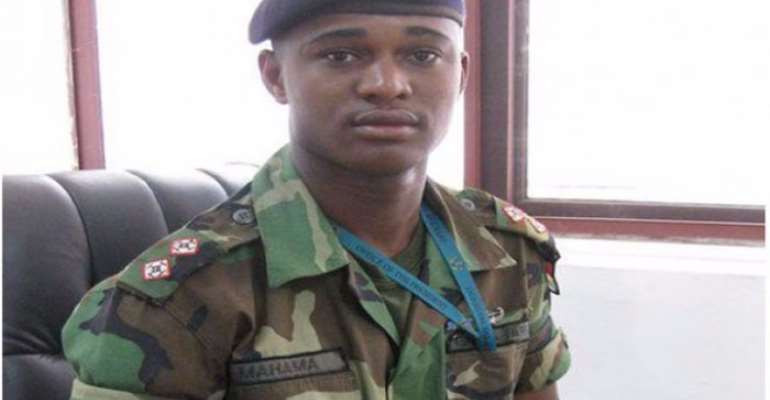 Some defence lawyers in the trial of 14 persons accused of brutally murdering the late Major Maxwell Adam Mahama at Denkyira Obuasi in the Central Region have objected to attempts by the prosecution to tender in a video evidence that captures some of the accused persons allegedly attacking the soldier.

According to them, the tendering of the video will be prejudicial to the trial as they could not confirm the authenticity of the video.

The investigator, Chief Inspector Samuel Agyakwa, had told the court that some of the accused persons were captured in the video hitting the soldier with cement blocks, stones, sticks and metal bars.

He told the court that his investigations also revealed that two of the accused persons — Charles Kwaning and Kwesi Asante — fired the shots that killed Major Mahama.

Besides, he told the court that William Baah, John Boasie, Bismarck Abanga, Kwadwo Anima and Bismarck Donkor also used their fists to attack the soldier.

Asked by the prosecution led by Evelyn Keelson, a Chief State Attorney, how he got the information, Chief Inspector Agyakwa said his investigation included interviewing suspects and interrogation of witnesses, as well as watching the supposed video.

The investigator told the court that after watching the video, he copied it on to a pen drive and while in Accra, and with the assistance of a crime scene expert, he captured still pictures from the video and slow motion form of the video as well.

George Bernard Shaw, counsel for six of the accused persons, said the witness is not the author of the video which he said was taken from social media.

That, he said, deprived the defenc the opportunity to question the person who captured the original video, including asking about the quality and operational efficiency of the implement used in taking the video.

He said, “In this age of photoshopping and the emergence of the phenomenon of fake news, it is against the tenets of fair trial to admit the video when the defence cannot question who took it,” the lawyer argued, adding “the fundamental rule of evidence is direct evidence when witnesses give accounts of their personal knowledge, experience and perception of events which they experienced with their senses.”

Counsel added that the video is 'heresy' and as the law deals with heresy, “I will urge you in the exercise of your discretion to exclude it.”

Theophilus Donkor, counsel for two of the accused persons, also objected to the tendering of the video, saying the video must first be played in court before the issues of objection come in.

He added that the video did not match 'evidential standards'.

In her response, the Chief State Attorney said a copy of the video had been served on the various counsel.

Mrs. Keelson stated that Mr. Donkor's initial objection for the video to be watched in open court is completely flawed because it is not supported by any rule of law or evidence.

She said, “the video can only be watched if only it has been admitted in court as evidence.”

The court presided over by Justice Mariama Owusu, a Supreme Court judge, sitting with additional responsibility as a High Court judge, said she wanted to apprise herself with the Electronic Transaction Act before ruling on the matter.

Mahama, NDC Console Rawlings Over Death Of Mother
17 minutes ago