What's behind a dolphin's whistle? South Africa scientists aim to find out 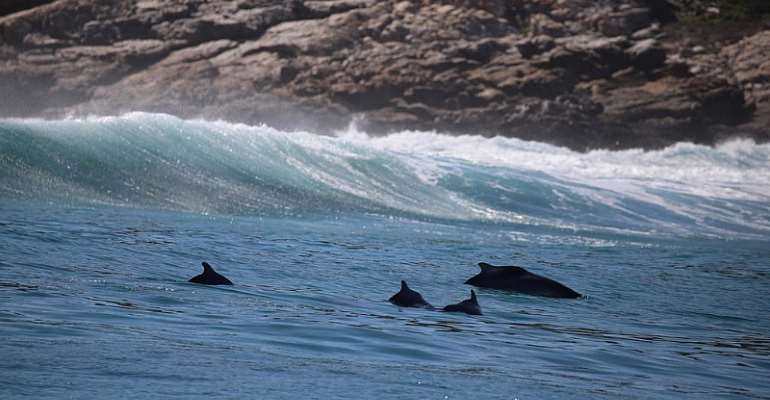 How is this for a great job: recording a dolphin's whistle? And not just one whistle, but hundreds, because each endangered Indian Ocean Humpback Dolphin has its own "signature whistle" among many repeated whistles.

Sasha Dines, a zoologist with South African NGO Sea Search who is investigating the species in Mozambique's Ponta do Ouro marine reserve, says being able to tell those whistles apart will be a vital step forward in the effort to find out more about these elusive dolphins -- and ultimately help conserve them.

A dolphin's signature whistle is a sonic “name tag” developed in its first year. Dolphins draw on the whistles of their mothers and peers, adapting them to create their own unique sound.

Listing individual dolphins helps scientists to build up as accurate a picture of a wild population as possible: how many there are; where they spend their time; how far they travel.

Indian Ocean Humpback Dolphins, named for the hump-like fatty deposits beneath their dorsal fins, have a vast geographical range that extends from the tip of South Africa to the west coast of India. But their populations are fragmented and in decline.

“Not many people are aware of these dolphins' existence and even less their endangered status,” Dines told RFI.

Dolohin's under threat
There are only an estimated 500 humpback dolphins in South Africa, and an unknown number in Mozambique.

Coastal development, tourism and pollution all pose threats to the species, said Dines.

“Chemical pollution in coastal areas has been a huge threat," she said, adding that humpback dolphins contain the highest concentrations of pesticides known as organochlorines "of any other marine mammal in South Africa.”

“We just don't know enough about the species (in Mozambique) to adequately describe how these threats will affect their population,” she said.

Initially, Dines and her team will focus on the Ponta do Ouro, south of the capital Maputo.

The area, a species-rich trans-frontier conservation reserve with neighbouring South Africa, has plenty of bottlenose dolphins and a resident humpback dolphin, though the team expects to find more, and to include more study sites throughout the year.

“We still have a way to go to investigate how humpback dolphin signature whistles are similar or dissimilar (to those of bottlenose dolphins),” said Dines.

Conserving dolphins
“This project aims to collect additional data such as video recordings of the individuals to align with our acoustic recordings to confirm whistle owners.”

The research in Mozambique will build on pilot studies done in South Africa through the SouSA Consortium, a network of scientists and conservationists researching the species.

Dines, who is conducting the Mozambican study as part of her PhD research, said her interest in humpback dolphins began four years ago while working with a conservation NGO in Mossel Bay, South Africa.

“I hope my research can make a difference in the conservation of humpback dolphins,” she said.

“In southern Africa the news is dominated by humpback whales and white sharks. But these little guys really deserve and need our attention.”