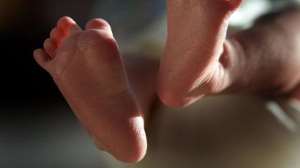 A Chinese newborn has been diagnosed with the new coronavirus just 30 hours after birth, the youngest case recorded so far, state media said.

The baby was born on 2 February in Wuhan, the epicentre of the virus.

The baby's mother tested positive before she gave birth. It is unclear how the disease was transmitted - in the womb, or after birth.

Only a handful of children have come down with the virus, which has killed 563 people and infected 28,018.

It added that the baby, which weighed 3.25kg at birth (7lbs 2oz), was now in stable condition and under observation.

How could the baby have been infected?
Medical experts say it could be a case where the infection was contracted in the womb.

But it is also possible that the baby was infected after birth from having close contact with the mother.

"It's quite possible that the baby picked it up very conventionally — by inhaling virus droplets that came from the mother coughing," Stephen Morse, an epidemiologist at the Mailman School of Public Health at Columbia University, told Business Insider.

Is it common for children to get the virus?
Very few children have tested positive in this recent outbreak, which is consistent with other coronavirus outbreaks in recent history including Sars and Mers.

A report by the Journal of the American Medical Association (JAMA) said the median age of patients for the current outbreak is between 49 and 56 years, adding that cases in children "have been rare".

Similarly, during the Mers outbreak in 2016, the World Journal of Clinical Paediatrics said the virus was rare in children, though it added that the "reason for [this] low prevalence is not known".

A six-month old baby in Singapore is known to have tested positive for the new coronavirus, as well as an eight-year-old from Wuhan who is currently in Australia.

The virus has spread overseas, with 25 nations confirming a total of 191 cases, although there has so far been only two deaths outside mainland China.

The coronavirus causes severe acute respiratory infection and symptoms usually start with a fever, followed by a dry cough. Most people infected are likely to fully recover - just as they would from a flu.