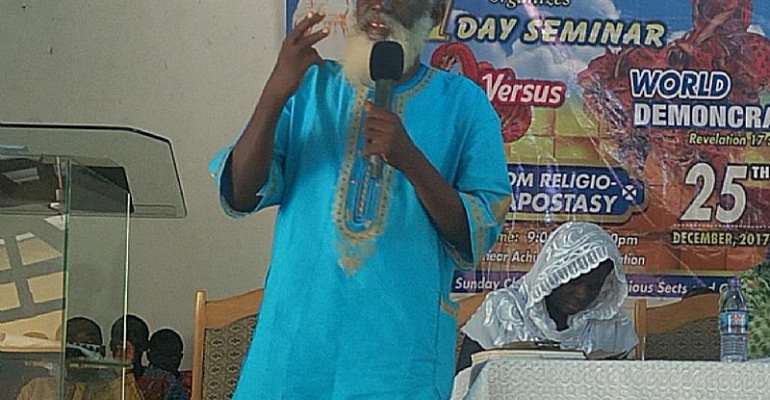 The 7th Day Congregation of Theocracy has held a three day seminar for its members and the general public at the Girls Guide Training Center, Achimota, from 24th – 26th December 2019 under the theme; “Is Building of National Shrine Lawful?”

The Construction of the National Cathedral for Christianity is just about to begin at the East Ridge, a prime area, near the state House in Accra. Scores of ancient and modern villas which housed the judges and some high government officials had been pulled down to give way for the Cathedral. This has brought about a public debate why a National Cathedral should be built as our economy is not strong enough to take such projects.

Just as the debate rages on, the Traditional Religion Practitioners have also come out with a demand for a National Shrine to be for built for them by the government. This has also generated heated public debate that is “BUILDING OF NATIONAL SHRINE LAWFUL?”

An eminent religious leader, the founder of the 7th Day Congregation, an anti-homosexuality and lesbianism Advocate and a philanthropist, Apostle, Dr. Kadmiel Agbalenyoh, has added his voice to the debate and explains that, without Cultural Anthropological controversy, the Traditional Religious System is the oldest Religious Beliefs and Practices after the flood. It was founded by Nimrod the grandson of Patriarch Noah in the land Shinar, now called Asia Minor or Middle East. The religion is a Religious and Political Worship – Genesis 10:8-12.

Apostle Kadiemel said, The God of creation gave to Abraham and his posterity the kingdom of Nimrod, which became the Land of Israel – Genesis 15:17-21, Exodus 3:7-12, Nehemiah 9:13-14. Leviticus 26: 46; Acts 7:37-38 and Romans 9:4-5. At Mount Sinai, the Almighty God of the Hebrews forbade the worship of the gods of the nations. In course of history, the children of Israel disobeyed their God and worshipped other gods beside the God who brought them from Egypt, bestowed to them the kingdom of Nimrod. Exodus 20:1-11; Exodus 23:23-24, Deut 7:1-6. The children of Israel had forced Aaron to make a god for the Exodus – Exodus 32:1-6. King Solomon was the first king of the United Israel who worshipped pagan gods and built their shrines – 1 Kings 11:1-11. King Jeroboam who ruled the Northern Israel established the worship of another god to replace the Lord God of Israel -1 Kings 12:25-31. It therefore became the Traditional Religious worship in the Israeli Northern Kingdom – during the reign of King Zimri, King Omri and King Ahab – 1 Kings 16:15-33.

The Lord of God
Apostle Kadiemel said, according to Prophet Micah, the Nations have their own gods while the Kingdom of the Hebrews worships the Lord God who created the whole world (Micah 4:5). In view of this, the religion of Nimrod has gained root on earth. Non-prophetic and prophetic kingdoms, such as Amalikites, Ammonites, Moabites, Philistines, Assyrians, Egyptians, Babylonians, Persians, Grecians, and Romans have their own traditional gods. (Babylon > Dan 1:1-4; 3:1-6; Persia > Esther 3:7-10, Grecians > 1 Macc. 1:41-43; 6:1-6; Romans > Pageant of World History, page 74, Rev 2:12-14 – Emperor Constantine reformed the Roman Traditional Religion, calling it Roman Christian Religion – AD 313; 325 and 336, which King Theodosius has declared Roman State Religion (AD 392).

These Arabian gods is the Black Stone, which Prophet Muhammad sanctified, to become the symbol of the Islamic Religion. "Muhammad's teaching was new to Arabs, most of whom practiced polytheism. They had many Shrines or special places where they worshipped their gods. A very important Shrine, the Kaaba (Kah-bah), was in Mecca" World history, page 356. "The Blackstone of Mecca was (and still is) embedded within the wall of a Shrine called Kaaba (Kah-uh-buh), which in Arabian means "cube" Besides the Black Stone, the Kaaba contained idols representing 360 gods, including one deity called Allah" World History (D.C. Heath), page186.

2nd Word War
He further explained that, immediately after the Second World War, world leaders replaced the Law of God with the Universal Law, also called UN Human Rights in AD 1948. Under this Universal Law, all forms of Religious tradition are recognized and protected (Rev 16:12 14) the Roman Christian Religious System at the Vatican Council II, recognized the traditional Religious System (Vatican Council II, page 739). In fact, any Traditional Religious Nations, which embraced Western European Democracy, becomes a secular State, even Israel, Vatican City and Islamic states became secular States. Thus Ghana, which had independence from British rule in 1957, and member of United Nations, and befriended United States of America, European Union and strong member of the British Commonwealth of Nations, has become a secular State since independence, and has sacrificed her Christianity.

National Shrine
Apostle Dr. Agbalanyoh concluded that, the State of Ghana, which is secular and democratic, allows pluralism of cultures and religions. It is therefore unconstitutional for any religious organization to prevent the Government from recognizing any other religion (Christian Religion, Islamic Religion, Tradition Religion and others). If the Government accepts to build National Cathedral for Christianity and National Mosque for Islam, why not also the National Shrine for Traditional Religion? We should understand that the traditional worship has existed before the advent of Christianity and Islam. It is therefore Constitutional should the Government of Ghana, through the Parliament and Council of State consider to build a National Shrine for the Traditional Religion and Chieftaincy. Unknown to most religion, especially Christianity is that traditional rulers are the custodians of the Traditional Religious System in Ghana.