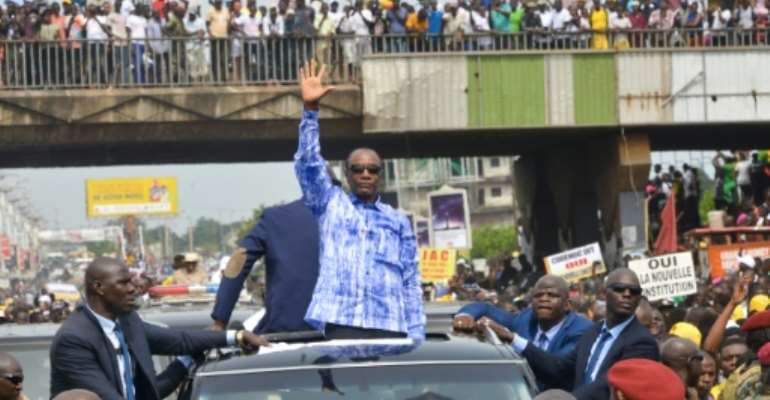 President Alpha Conde has been accused of trying to extend his rule by modifying the constitution. By CELLOU BINANI (AFP/File)

Guinea's main opposition parties on Wednesday said they would boycott a referendum on constitutional changes that critics say are ploy by President Alpha Conde to stay in power for a third term.

Conde, in office since 2010 and re-elected in 2015, on Tuesday announced a constitutional referendum will be held on March 1 despite months of massive protests.

At least 28 civilians and one gendarme have been killed in the sometimes violent protests in West African state's capital Conakry and other cities since October.

A presidential decree also set upcoming legislative elections for the same date, threatening to further inflame tensions in a country struggling with poverty and a legacy of instability.

"Nothing that Alpha Conde does would surprise us. It is up to us to do as we have promised," said one leader of opposition Liberal Bloc. "To deny him the referendum on the new constitution and deny Alpha Conde a third term."

Another opposition party, the Union of Democratic Forces, or UFD by its French initials, called the "coupling" of the legislative election and the referendum together "political banditry."

"We are going to urge our voters not to touch a single ballot sheet in the referendum and that we only vote in the legislative elections," UFD president Mamadou Bah Baadiko told AFP.

The current constitution allows the president only two consecutive terms.

Conde has neither confirmed nor denied claims he intends to run again this year.

But critics fear the 81-year-old incumbent may use the new constitution as a pretext to restart the clock, enabling him to stay in office for another two terms.

Jailed under previous hardline regimes, Conde became Guinea's first democratically elected president in 2010 and was returned to office by voters in 2015 for his second and final five-year term.

His election rallied hope for democratic change after decades of authoritarian rule in Guinea, a major producer of bauxite and alumina.

But critics say he too has since drifted toward authoritarianism.

Hundreds of thousands have taken to the streets since October at regular rallies organised by an umbrella group called the National Front for the Defense of the Constitution or FNDC.

"This is a trick to try to make more people go to the polls," FNDC leader Abdouramane Sanoh said of the decision to run the constitution and the election together on March 1.

Staging the referendum and legislative elections on the same day will "trigger a situation which is going to be very difficult to manage," Abdoul Gadiry Diallo, head of the Guinean Organisation for the Defence of Human Rights (OGDH), said.

"Peace and national unity in Guinea have never been so threatened," his organisation said in a statement on Tuesday.