The legacy of Kenya's Daniel arap Moi: A sinner or a saint? 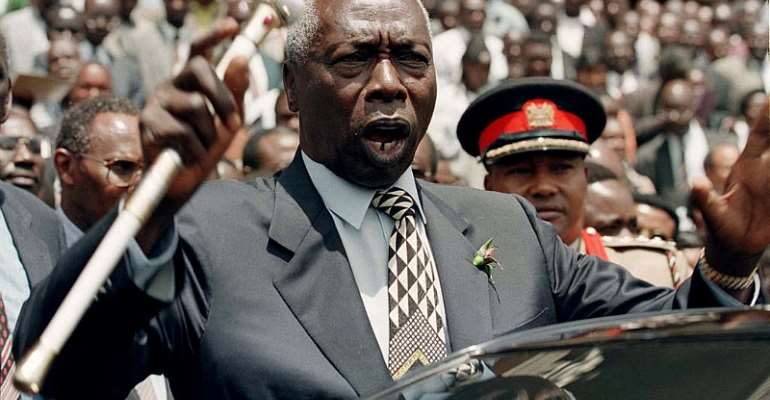 Kenya's President Uhuru Kenyatta has declared a period of national mourning until a state funeral is held for former president Daniel arap Moi, who died on Tuesday at the age of 95. But what legacy did the man leave behind after leading Kenya for 24 years?

Daniel Arap Moi, Kenya's second president since its independence, led the country from 1978 until 2002, leaving behind a nation that looks back at his time in power with mixed feelings.

Stability vs. freedom
“His genuine concern, selflessness, loyalty and sincerity enable him to acquire staying power and attract the support of millions of patrons,” said vice-president William Ruto on Monday, following news of Moi's death.

“Despite several constraints, president Moi's determination ensured that Kenya never stumbled or slipped into the precipices that engulfed so many other nations. Instead, he strengthened the post-independent Kenya, consolidated our sense of nationhood and expanded public services to reach all part of Kenya."

At a time when many regional neigbhours were encountering instability, war, and genocide; Moi's Kenya remained stable, but it came at the expense of freedom.

Those “constraints” Ruto refers to are the ones brought on by Moi following an attempted coup d'état in 1981.

A constitutional amendment in 1982 effectively made Kenya a one-state party, and any opposition to that was swiftly quelled.

Abuse and massacre
“People are remembering those (crackdowns), but [with] mixed feelings,” Martin Oloo tells RFI, a Nairobi-based historian and analyst.

“There is a sense that perhaps the way he ruled or the way he led at that time may have been fit within the context that Kenya needed a bit of a high hand for it be held together,” he says.

But that “high hand” came with a cost of human lives.

According to a statement released by Amnesty International Kenya on Tuesday, “Kenya under the 24-year-old presidency of Daniel arap Moi experienced some of the worst human rights abuses in its history.”

For example, on 10 February 1984, more than 5000 ethnic Somali's were killed by Kenya security forces under Moi, though official figures put it at only 57.

Known as the Wagalla massacre, it was the government's attempts at the time to disarm ethnic Somali clans in the north-east of the country.

A report issued by the Truth, Justice and Reconciliations Commission that assessed his rule notes that the government of Moi was “responsible for numerous gross violations of human rights,” including “unlawful detentions, as well as systematic and widespread torture and ill-treatment of political opponents and human rights activists.”

A vision for Kenya?
While many cannot forget the political style of Moi, many choose to focus on the benefits he brought to Kenya.

As a young boy growing up in a small village, it was pure luck that his family helped him get to school, says Oloo.

Soon after completing his education, he found work as a teacher.

During that time, the area where he was teaching was looking for someone to represent them at the local level. Moi was thought to have just what it took to do that and he was encouraged to run.

And from that point on, he just kept on rising explains Oloo.

His rise to power included a vision for a stable and fairer Kenya.

“He really developed the education sector….he built model schools for girls and boys and he realy contributed ot that.”

Well ahead of his time, he's also responsible for taking on environmental and conservation projects.

Many tend to favour his humble beginnings and development projects over his harsh ruling.

And his ultimate gift to the country was his ability to keep the country united, as Moses Wetangula, a former minister and lawyer of those who attempted the coup d'état against Moi, noted on Tuesday.