Restored Delacroix masterpiece to return to the Louvre 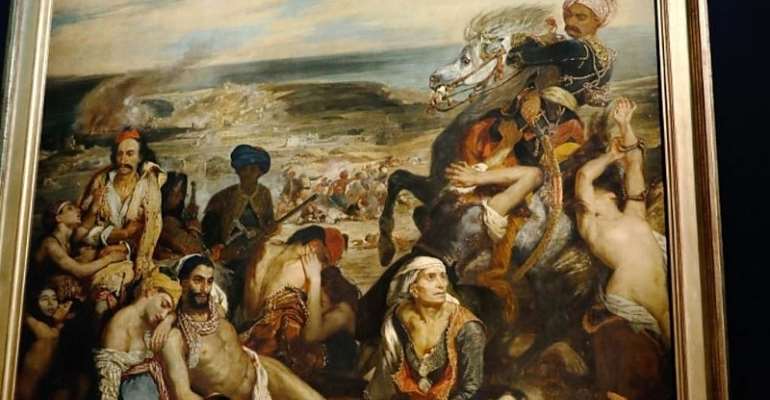 Art lovers have been waiting for three months for the return of one of French painter Eugène Delacroix's works of art, Scenes from the massacres at Chios as it was being restored, and will grace the wall of the Louvre again on 19 February, according to the Louvre museum's painting curator.

"This operation reveals all the diversity, the richness of the colors that Delacroix uses,” said Côme Fabre, the Louvre's painting curator.

Restorers removed grime and a number of layers of varnish, that left the painting looking very yellowed. The restoration was funded by a patronage from Bank of America.

“It was absolutely necessary to remove this gray and yellow filter which distorted the perception of the artist's palette,” he said during a presentation to journalists at the museum.

The large format painting (4.1m x 3.5m), depicting the true story of Greek hostages on the island of Chios who suffered under the Ottoman rule during the Greek War of Independence in 1822.

Its full title is Scenes from the massacres of Scio: Greek families awaiting death or slavery.

The Ottoman sultan demanded that the Greek island, once a centre of commerce, be destroyed. The Turkish fleet embarked on a two week expedition of rape and murder before burning Chios to the ground. An estimated 25,000 people were killed in a number of Greek settlements, and another 45,000 ended up in slave markets in the Ottoman Empire.

Delacroix was so moved by their plight, that he painted the scene independently  without a patron or commission. It was well-received, when exhibited at the 1824 Salon in Paris, and is considered one of his masterpieces.

Restorers working on the painting were aided by a diary Delacroix wrote while painting the piece over six months in 1824.