Europe has banned neonicotinoid insecticides. Action is needed in Africa too 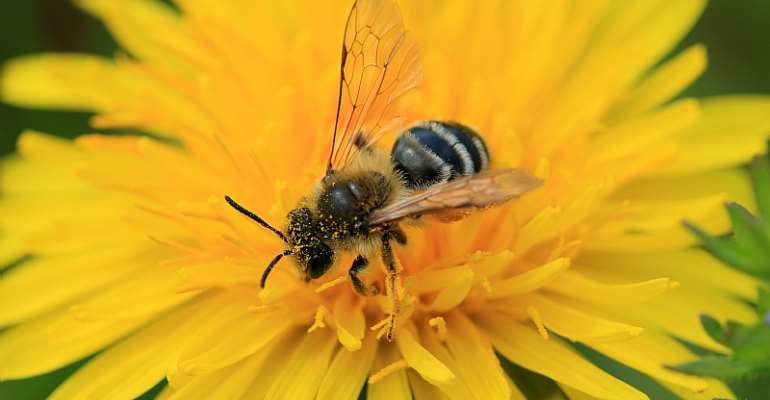 A bee on a flowering plant - Source: Shutterstock

First marketed in the late 1990s, neonicotinoid insecticides have become the world's most widely used group of insecticides. They offer lower toxicity to mammals than the insecticides they replaced. But their systemic nature means that all parts of the plant become toxic to insect pests. Even just a coating around seeds offers weeks of protection to a growing crop.

This is great for farmers. But the characteristics that make them so effective have also wreaked enormous collateral damage. Neonics (as they are more familiarly called) are now the most notorious group of insecticides in the world.

Neonics are water soluble and non-selective. This means that they can contaminate the environment, causing collateral damage to non-target organisms. Studies have found that, when neonics are used as seed dressings, up to 95% of the active ingredient doesn't enter the plant. It washes away, contaminating the soil and plants growing in neighbouring fields, and leaches into water bodies, where aquatic insects are exposed to it.

On top of this, the active ingredient also spreads into pollen and nectar, where pollinating insects such as bees, hoverflies and butterflies can ingest the neonics. Seven years ago, the harmful effects of neonics on honeybees raised the insecticides's profile and led to an initial partial ban in the EU.

Since then, there has been mounting evidence showing negative effects also on other bee species and insects. The growing body of evidence of neonics' harmful effects finally led to a more comprehensive ban in Europe in 2018.

Most of the evidence that led to this decision was based on scientific papers from Europe or North America. This left an important question: what might be happening in other parts of the world – including Africa – where the crops and pollinators are different and where science, regulation and environmental monitoring may be weaker?

To answer this question in the African context, the Network of African Science Academies, led by the Academy of Science of South Africa, brought together experts from 17 African countries and reviewed over 200 studies from 28 African countries. The final report brings together an unparalleled amount of information and identifies key messages for policy makers to make African agriculture more sustainable.

The evidence indicates that all African countries are using neonics, which are replacing older insecticides. The available data are limited. But what's there shows widespread contamination of honey and pollen. In addition, neonic residues have been found in the few studies conducted on soils and water bodies. Market penetration currently appears to be less than in Europe, but market surveys flag Africa as the fastest growing market. And there is evidence of the increasing use of dressed seeds.

Our findings show that the concerns that led to restrictions on neonics usage in Europe also apply to Africa. This suggests that scientists and policy makers must urgently consider the potential threats from neonics in African agriculture.

The continent's honeybees and other pollinators

In Europe most beehives are owned and managed. African bees are genetically highly diverse and are typically managed differently: in many African countries, bees are wild and only some colonies are captured for beekeeping.

There are already signs of strain. Some areas in Africa already report declines in honeybee populations. But the lack of good census data means that declines are difficult to quantify.

Read more: Managed bees versus wild bees? It's not that simple in South Africa

In addition, beekeepers across the continent are struggling to find bees to replace lost swarms. There are serious concerns over the viability of this important source of income for many rural communities in countries like Kenya, Tanzania and Uganda.

But protecting honeybees is only part of the solution. As in Europe, honeybees are only one of many pollinating species. African pollinators include sweat bees, solitary bees, wasps, flies, butterflies, moths, beetles, birds and even bats. For many African crop species, one or other of these species is a more efficient pollinator than the honeybee. Unless these pollinators, too, are protected there's a danger of lower seed or fruit production by crops.

One area in which valuable data has been collected is on the use of neonics to control cocoa mirid bugs. Research shows that widespread use of neonics in cocoa cultivation, for example in Ghana, led to the proliferation of secondary pests due to the destruction of natural enemies. In addition, pollination of the flowers by the natural pollinator (a midge) was severely reduced, requiring the introduction of expensive (and less effective) manual alternatives.

There is also evidence of resistance to neonics developing in aphids, whiteflies, and mirid bugs, meaning that farmers must use higher doses or other pesticides to control them.

Inevitably, with limited scientific resources spread across such a vast and diverse continent, some of the expert evidence is anecdotal and quantitative studies of specific cause and effects are lacking. However, the studies cited in the NASAC report provide no evidence that African bees and other insect species are somehow less sensitive to neonics than elsewhere. Therefore, the concerns which led to restrictions in Europe should also apply to Africa.

The study also strongly argues for the precautionary principle to apply: don't wait until the damage is even more obvious.

The first step would be to encourage sustainable use of pesticides. This sees pesticides as the last weapon in the farmer's arsenal (after non-chemical methods) – the reverse of prophylactic application. Insecticides should be kept in reserve and only applied when hygiene, physical methods and applying indigenous technical knowledge have not prevented a pest from exceeding a damaging threshold population.

Achieving this will require a sustained effort in farmer education, strengthening agricultural extension services and moving away from the suppliers of pesticides providing (not always unbiased) advice.

The sustainability of African agriculture is critical to the continent's food security and for maintaining agriculture's contribution to Africa's rural communities and national economies.

Thanks to the NASAC report, African policy makers now have the science-based recommendations they need to protect Africa's agriculture and biodiversity.

Peter McGrath is coordinator of the InterAcademy Partnership (IAP) in Trieste, Italy, which receives core funding from the Government of Italy via a contribution to UNESCO.

Michael Norton receives funding from the German Federal Ministry of Education and Research (BMBF) for this project. He is affiliated with the European Academies' Science Advisory Council (EASAC)

Nina Hobbhahn receives funding from the German Federal Ministry of Education and Research (BMBF) for this project. She is affiliated with the European Academies' Science Advisory Council (EASAC).

By Peter McGrath, Researcher, Biosciences, The InterAcademy Partnership And

Article
Powered By Modern Ghana
Does Ghana Deserve Forgiveness Of Debts, HIPC Initiative Completed Or Not?
Economic relief through social safety nets during the COVID-19 crisis: the case of Ghana
China: The Global Superpower
Education is both the victim and the best weapon in Central Sahel conflict
The benefits of integrating the diagnosis of depression and diabetes treatment
Nigeria needs innovation and science investment to help control COVID-19
Drug-resistant gonorrhoea is a growing threat: a South African case study
How to get Malawian men more involved in antenatal care - and why it matters
2020 Polls: What If The Church Firmly Called For The Implementation Of The Constitution Review Commission’s Report? Lessons From The #Endsars Struggle In Nigeria
COVID-19 Updates Live Dashboard
TOP STORIES

They Sent 'Dante Crocodiles' To Our Area To Scarce Us — Ajum...
41 minutes ago