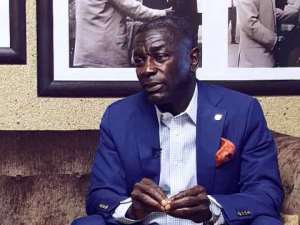 The state has discontinued the case against the founder of collapsed UT Bank, Prince Kofi Amoateng at the circuit court.

Kofi Amoabeng was facing charges of stealing and money laundering following the alleged role he played in the collapse of UT bank.

According to the prosecution represented by ASP Emmanuel Nyamekye, they intend to file a fresh case against Mr. Amoabeng at the High Court hence their decision.

The decision means the trial at the circuit has been brought to an end.

Meanwhile, a similar case which involves Managing Director of defunct Beige Bank, Mike Nyinaku at the same circuit court has been adjourned to March 5, 2020. Kofi Amoabeng before court

Mr. Amoabeng was put before court in January to face charges of stealing and money laundering in the collapse of UT Bank Ghana Limited.

He was however granted bail, by the court presided over by Justice Essandor, to the tune of GHS110 million with two sureties who earn not less than GHS 2,000. UT Bank collapse

The Bank of Ghana on August 14, 2017, announced that it had revoked the license of UT Bank and ordered GCB Bank to take over its operation because it had severe capital impairment.

Provisional figures released by the central bank showed the total liability of UT Bank stood at GH¢850 million while its total asset was pegged at GH¢112 million.