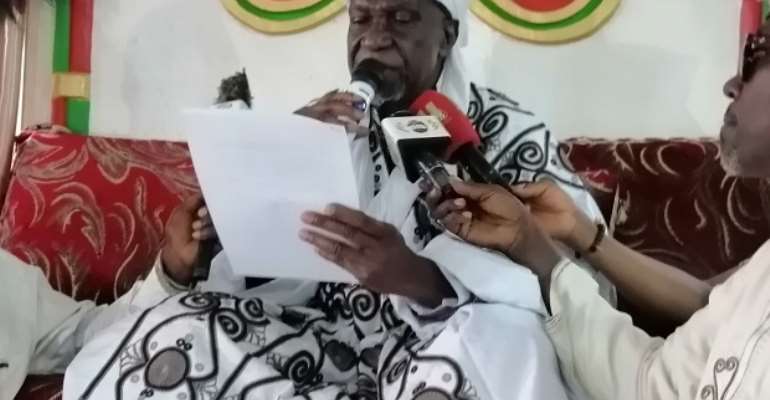 The Ashanti Regional SarkinZongo, Mai-Martaba Sultan Omar Farouk Saeed, has admonished the youth in Zongo communities not to allow themselves to be used by politicians as instrument of destruction of Ghana's peace by perpetrating violence during elections.

He has, therefore, urged “all the people of Zongo to comport themselves in the very best manner that will ensure peaceful election in the country.”

Speaking at a ceremony to mark his 10th year installation as SarkinZongo, Mai-Martaba Saeed also called for absolute unity among Zongo people in order to bring about development in their communities.

For him, peace is a fundamental pre-requisite for any society to have meaningful development, and therefore called on all community leaders and chiefs to help ensure peace at all times.

He expressed his deep appreciation for the support and advice by the Asantehene, Otumfuo Osei Tutu II, for incorporating the Zongo communities into various cultural and traditional activities of Asanteman.

“For the past 10 years, we have made significant progress in educating students in our communities. We've obtained scholarships for a number of them to study medicine and other courses,” he stated and pointed out that seven of the students were having their studies outside the country.

According to him, his reign has also seen to the mobilisation of Zongo indigenes abroad to contribute towards Muslim activities in the region, adding the successful construction of the SarkinZongo palace formed part of his achievements.

The Ashanti Regional Chief Imam, Sheik Abdul Mumin Haroun, also called on the Zongo youth to hold their uniqueness and strength in high regard by not running the danger of destroying themselves with violence.

The Chief Executive of Asokore-Mampong Municipal Assembly, AlhajiAlidu Seidu, appealed to the media not to allow their platforms to be used to churn out falsehood and misrepresentations during this year's electioneering campaign.

He called on the media to give people access to honest and fact-based journalism that promotes development, peace and unity.

Okada Legalization: Disaster For The Country
6 minutes ago