Catholic Bishops To Wage Into Politics, To Campaign Against Parties Not Ready To Ending Vigilantism 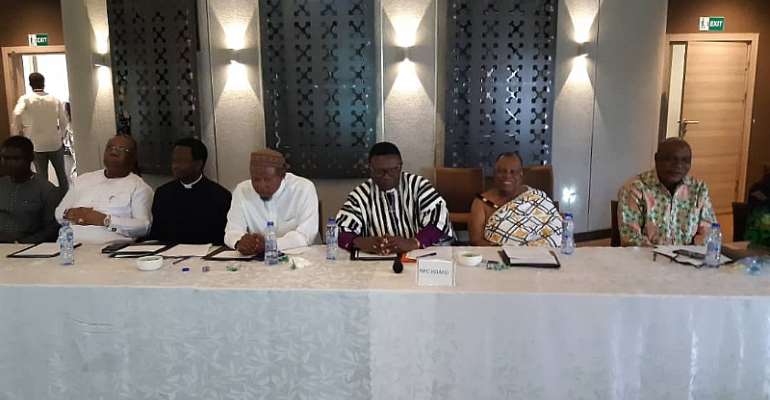 The Catholic Bishops Conference has threatened to campaign against political parties that do not show any commitment to ending political violence.

The General Secretary of the Catholic Bishops Conference, Very Reverend Lazarus Anondee, made these comments on Tuesday after the National Democratic Congress (NDC) refused to sign the final roadmap to ending political vigilantism in the country.

Executives of the NDC refused to endorse the document with an excuse that it was not exhaustive enough.

Speaking at the ceremony on Tuesday, Very Reverend Anondee insisted that the country's democracy and peace must be safeguarded.

“Don’t be surprised if any party does not demonstrate a commitment to ending this, we may have no choice but to use our pulpits to campaign against such parties because if you encourage this, you are not encouraging democracy. You are not trying to help build our country.”

The NDC described the signing ceremony as premature saying not all the issues concerning political violence had been addressed.

The party argued that only four out of the 22 recommendations in the roadmap concerned political parties and called on other stakeholders like the Electoral Commission to be a signatory to the document to ensure accountability.

“We cannot be seen to be signing a document for which other parties who are playing a part do not sign because then we cannot effectively monitor it… we think that the content is good but we do not have a way of making sure that it becomes effective,” Alex Segbefia said on behalf of the NDC at the ceremony.

The National Peace Council, however, gave the NDC another opportunity to reconsider its position on the matter.

Representatives of the NPP, however, signed the roadmap on the day and expressed disappointment with the NDC.

General Secretary of the NPP, John Boadu said: “The roadmap was not sprung on us. We were given the opportunity to give our comments months ago. I am disappointed at our colleagues at the other side for not passing their comments to the Peace Council.”

The dialogue was instituted by the National Peace Council following the violence that erupted at the Ayawaso West Wuogon Constituency by-election.

The NDC held a commemorative durbar held to mark the first anniversary of the Ayawaso West Wuogon by-election violence on January 31.

The by-election was meant to replace the sitting Member of Parliament, Emmanuel Kyeremateng Agyarko, who had died from an illness.

The dialogue has so far brought together representatives of the NPP, NDC, the Ghana Police Service, Institute for Democratic Governance and the Kofi Annan International Peacekeeping Training Center among others.