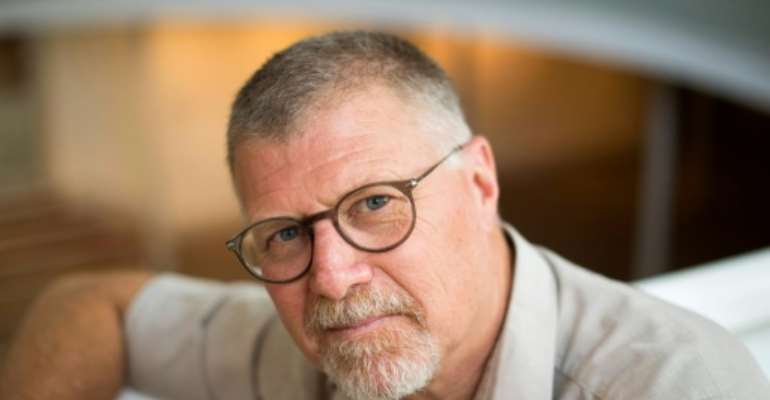 The 61-year-old former journalist said all the characters in "The Last Hunt" are based on real people, including Zuma. By RODGER BOSCH (AFP)

"I have survived several attempts to kill me," former South African president Jacob Zuma had claimed in one of many his rants against the corruption allegations which forced him to resign in 2018.

His words drew little sympathy and inspired bestselling thriller novelist Deon Meyer to hit out at the scandal-plagued former president and other corruption-tainted officials in his last book.

Published in 2018, "The Last Hunt" follows detectives Benny Griessel and Vaughn Cupido as they investigate the disappearance of an ex-member of South Africa's elite police unit.

They enter the treacherous world of high-level government corruption and uncover a conspiracy against the president, who is modelled on Zuma.

Zuma is accused of orchestrating a systematic plunder of government coffers during his nine-year administration -- a scandal known as "state capture".

He is also suspected of taking kickbacks from a multi-million-dollar arms deal during the late 1990s, for which he has been criminally charged.

An arrest warrant was issued Tuesday after Zuma skipped pre-trial court attendance on grounds of ill-health.

"I have written this book because I was very angry," Meyer said during an interview in the picturesque southwestern town of Stellenbosch, where he lives.

"We have been through so much in this country... to see Zuma messing up the whole process made me very angry (and) I wanted to write about that," he told AFP.

"This guy (Zuma) is so bad, so corrupt, he is doing so much damage, surely there must be someone out there who thinks one solution would be to get rid of him."

The 61-year-old former journalist said all the characters in "The Last Hunt" are based on real people implicated in "state capture".

Zuma, ministers, senior officials and the wealthy Indian-born Gupta brothers -- accused of bribing their way into government contracts -- all feature in the 400-page novel under different names.

"I didn't want to embarrass the publisher," said Meyer, adding that naming the former president could see him being sued.

"I don't think there is any doubt it's him (Zuma) I was writing about," he said.

Only a handful of the government and business figures listed in "The Last Hunt" are under investigation in the real world.

No one has been sentenced so far, and they all plead not guilty.

Meyer presents a different, more optimistic scenario in which justice is served.

"We are in very deep trouble," said Colonel Mbali Kaleni, the fictional head of Cape Town judiciary police in the novel.

Zuma, ministers, senior officials and the wealthy Indian-born Gupta brothers -- accused of bribing their way into government contracts -- all feature in the 400-page novel under different names. By Themba Hadebe (POOL/AFP/File)

Another character, a veteran apartheid fighter called Lonnie May, lamented that fighting "for justice for the children" had only led to "kleptocracy".

Meyer admitted that his novels do not paint a pretty picture of post-apartheid South Africa.

"I wish I could write about South Africa as a country that has very little crime," he said.

"But I have to be honest with the reality," he added.

Since the end of white-majority rule in 1994, crime, hardship and corruption are rampant in South Africa.

An average of 57 murders are recorded per day, according to latest government statistics.

Yet not all of Meyer's work is defeatist.

"I write about policewomen and men who do their jobs, that are hard working, that are not corrupt."

Meyer however still believes in the vision of the "rainbow nation" espoused by South Africa's first black president Nelson Mandela.

"I am certainly less optimistic than 10 years ago but yes, I still am," he said.

"Even under Zuma there was a lot of very good things happening," but "not politically," Meyer added.

"In terms of race relations, in terms of relations between ordinary people, there have been tremendous changes."

He cited South Africa's rugby team, captained by a black player for the first time in history, who won the World Cup last year.

With 13 novels under his belt, Meyer shows no sign of slowing down.

He is writing the next Benny Griessel sequel and dreams of delving further into other genres such as his post-apocalyptic novel "Fever".

"It is very important for a writer to be stimulated by doing something different. And to keep believing in the future," Meyer said.

"I don't think South Africa will become the country that I dreamt for in my lifetime," he added with a tinge of regret.

"Hopefully in my grandchildren's lifetime, who knows?"