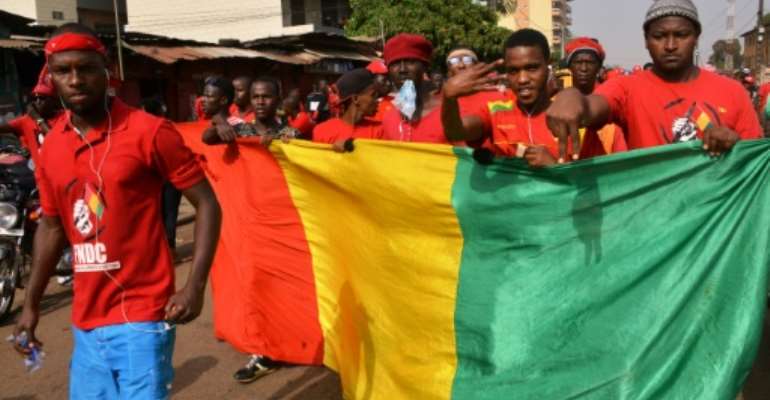 Hundreds of thousands of people have protested since mid-October over concerns that Alpha Conde intends to use the reform to extend his mandate. By CELLOU BINANI (AFP/File)

Guinea's president announced on Tuesday evening that a constitutional referendum will be held in March, according to state media, despite massive protests against the move.

The government will hold the poll on March 1 on the same day as planned parliamentary elections, according to a decree broadcast on state television and radio, heard by an AFP reporter.

Hundreds of thousands of people have protested in the West African state since mid-October over concerns that President Alpha Conde, 81, intends to use the constitutional reform to extend his mandate.

At least 26 civilians and one gendarme have been killed in the protests to date, according to an AFP tally.

"The electorate is convened on the same day for legislative and referendum ballots," the government said on state media.

Guinea's political opposition has vowed to boycott the parliamentary election, however.

Jailed under previous hardline regimes, Conde became Guinea's first democratically elected president in 2010 and was returned to office by voters in 2015 for his second and final five-year term under the current constitution.

When he first launched consultations on reforming the constitution in September, the opposition accused him of seeking to in effect restart his time in office and allow him to run for a third term.

However, a draft constitution presented in December still limited the number of presidential terms to two.

He has neither confirmed nor denied claims that he intends to run again.

Your Petition Is Opportunistic, Populist; We’re Already Prob...
58 minutes ago