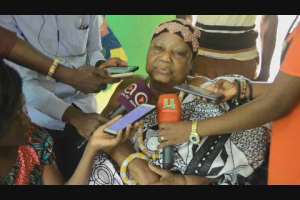 The Queen Mother insisted that Ohyeawora Bian Panyin IV remains the legitimate Chief and advised the general public to disregard the purported destoolment and accord him with all the necessary recognition and respect to enable him bring the needed development to the area.

Addressing the media at Dompim-Pepesa Palace, the Queenmother expressed shock over the purported destoolment by Wassa Fiase Traditional Council, describing the action as uncustomary and a breach of the Chieftaincy Act.

She said, Ohyeawora Bian Panyin IV was rightfully installed and outdoored as the Chief of Dompim-Pepesa Divisional Council and since his enstoolment he has never flouted the laws nor misconducted himself in public which should warrant his destoolment.

Last week there was report which circulated in the social media and some news portal that a new chief has been enstooled to occupy to divisionsal seat of Dompim-Pepesa Divisional Council due to the destoolment of Ohyeawora Bian Panyin IV by Wassa Fiase Traditional Council.

Dompim-Pepesa Divisional Council is one of the stool that pays allegiance to the authority of Wassa Fiase Traditional Council.

But according to the Queenmother, Obaahema Angaba II, even though they serve the Wassa Fiase stool, the traditional council cannot destool the chief without any charge, or her consent.

She added even if the said chief has misconducted himself contrary to the oaths he sworn, he must be given a fair hearing before they can decide on his fate.

She said as a Queenmother, she has the traditional powers to enstool and destool a chief, and she has not seen or received any report from the public or the traditional council that should warrant the removal of the chief from the throne.

Ohyeawora Bian Panyin IV on his part intimated that he became surprised when the report came that he has been destooled without any charge.

He said, he remains the legitimate chief and will not be perturbed about the alleged destoolment but will be focused to ensure Dompim-Pepesa becomes developed.

Ohyeawora Bian Panyin IV stressed that he will not sit down and allow anybody destabilise the peace of the Dompim-Pepesa because of their selfish ambition.

He therefore urged the public not to engage with anyone who will walk about claiming to be a new chief at Dompim-Pepesa.

He also told the people of Dompim-Pepesa to have the development of the community at heart instead of following money to pursue somebody's agenda which have the tendency of bringing riot to the area.