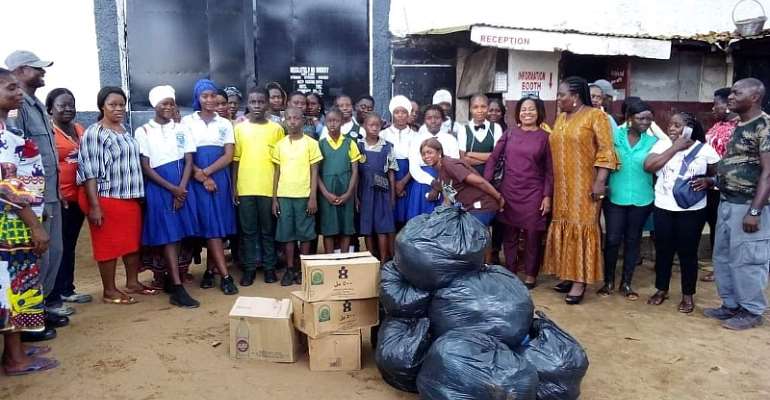 The Ministry of Gender, Children & Social Protection (MGCSP) has identified with several women inmates currently being held at the Kakata central prison and the South Beach (Monrovia Central Prison).

The Ministry's mission to the two prison facilities is in fulfillment of the 2019 International Women Day (IWD) objective which highlighted identifying with women inmates and patients in several hospitals through gifts and encouragement.

A Ministry of Gender's delegation headed by Deputy Minister of Gender, Alice Johnson-Howard included members of the Association of Female Lawyers of Liberia (AFELL), Liberia's Children Representative Forum, formerly the Liberian Children Parliament, and students representing over Eight Schools from both Monrovia and Kakata.

During the visit, members of the delegation were allowed to hold conversation with several women inmates to ascertain the cause of their imprisonment, whether they were tried or not, and the possibility of assisting them seek redress through legal intervention. While at the prison facilities, the Gender Team also sensitized the women inmates to take seriously their health and hygienic condition. Additionally, the inmates were afforded the opportunity to share their experiences and narrate vividly what led them to prison as well as the status of their respective cases.

Following interactions with the inmates, representatives of the Association of Female Lawyers of Liberia promised to provide legal assistance aimed at addressing the situation of pre-trial women inmates who are currently languishing behind bars at the various prison facilities.

Speaking on behalf of the Association of Female Lawyers of Liberia, Cllr. Vivian D. Neal - President of AFELL commended the Ministry of Gender, Children & Social Protection for organizing such endeavor. Cllr. Neal described the prison-outreach initiate as a life-saving venture that should be seriously considered for other prison facilities across the country.

She noted that the visit was actually fruitful as it will now set the stage for securing legal intervention or assistance for several other pre-trial women inmates who may have given up on getting legal redress.

For her part, Deputy Minister for Gender and head of delegation, Madam Johnson-Howard lauded the Association of Female Lawyers of Liberia (AFELL), the Liberia Children Representative Forum and the student community for honoring the ministry's invitation for the prison's visitation.

The Deputy Gender boss urge the women inmates to regain courage as the Ministry has initiated a firm relationship with AFELL so as to intervene for pre-trial women inmates and other women inmates who are kept at those prison facilities with minor offenses.

Meanwhile, several sanitary materials were distributed to women inmates at the two prison facilities. The presentation was made on Thursday, January 30, 2020 by the Ministry of Gender, Children and Social Protection with support from UNICEF, KTK and IRC.