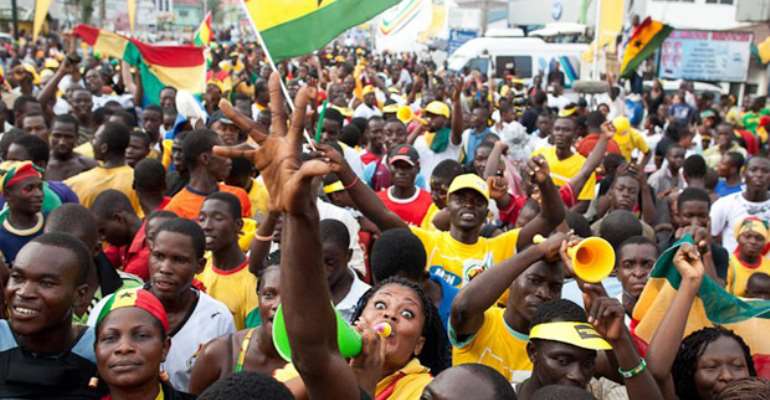 Ghana's macro-economic performance doesn't go hand in hand with spending power and that is a big problem for our government today.

If the current government is unable or unwilling to change that we might end up having another President and government next year.

Ghanaians tend to blame winning or losing an election in Ghana only on performance of the government.

I don't, because it's much simpler than that.
Looking at our voting patterns there are not many voters who can be influenced by a government's performance.

Other voters will vote for promises of cash or free education or if a presidential candidate is handsome or less handsome.

Each party blames the other one during elections of being incapable and corrupt, but that doesn't seem to change any voter's loyalty to his/her party.

NPP won the last election with a great slogan: Free secondary education, because we love everything easy and free of charge, and our President kept his word.

Today free secondary education is a huge financial burden on our economy paralyzing many other priorities like infrastructure, healthcare etc.

But the real reason NDC lost the election was dumsor.

The main reason we had Dumsor was not even NDC's fault but El Nino fault.

The World Meteorological Organization stated that due to weather influence of the El Nino in 2014/15, West-Africa saw less rain and shorter raining seasons. Due to El-Nino, Volta Lake had almost 50% less water intake resulting in lower power output and Dumsor.

Luckily for President Kuffuor our power consumption that year was much lower than today.

I am not a Prophet or Reverend who wants to make predictions but I told a former Minister that El Nino will decide the elections of 2016 and he said I might be right but the government is heavily investing in power generation.

Again I am not predicting anything but I foresee that the elections of 2020 will be decided on spending power for Ghanaians.

Although Ghana has been making strides to improve its macro-economic figures the ordinary Ghanaians spending power has been declining.

I am not talking about the happy few living in estates and driving the fancy cars in Accra, Kumasi and Takoradi but about the Ghanaians struggling every day to make ends meet.

The real-estate market has come to a standstill, more and more shops in our newly built shopping malls are empty longer and longer and sales in general is slow.

The fact that more people head for the street to engage in roadside and traffic sales is not only annoying for normal user of our roads but also an indication of hardship.

I own a guesthouse and my business is also declining, luckily for me it's also almost 2 years ago that my staff asked for a pay rise; another indication that jobs is less and less easy to find.

Friends, family and relatives also complain that “nothing” is running well, whilst institutions like the World Bank and IMF praise the Government for their macro-economic improvements, unfortunately for NPP, they don't vote.

The government will stand for a difficult choice very soon:

Are we going to raise spending power for Ghanaians to win the upcoming elections?

Or
Are we consolidating our macro-economic gains and probably lose the elections?

Mr. Ofori-Atta will prefer the last, but he is not suffering from loss of spending power.

President Akufo-Addo will prefer to win the elections and is probably ready to accept a possible economic setback in an effort to continue shaping Ghana his way.

The question is not about what is good for Ghana but how the ordinary Ghanaian can profit from development and growth of our country?

Fact is that differences between rich and poor, city and village are still growing.

The majority of Ghana's raising per capita income (per person) over the last 10-20 years has ended up in the pockets of the people who were already doing ok, or at least well.

They could already afford cars and houses and can now afford larger cars and bigger houses, especially with the real-estate prices on the decline.

The income of the poorest Ghanaians hasn't been at par with our economic growth, inflation is constantly hitting them hard but they have the same power once every 4 years as the city guys and rich people: one man one vote

And they have the power to use that vote as long as they don't sell it for T-shirts and fried rice.

They will vote this time on their spending power !
The writer, Nico van Staalduinen, is a concerned Ghanaian