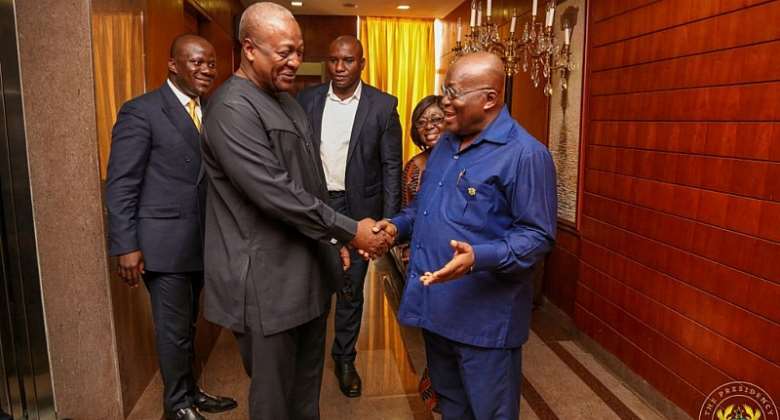 The above is the unedited extract out of what I read from President Nana Akuffo-Addo’s speech delivered at Kpalbe in my own homeland-Gonjaland. Well, I have decided to write this not in the same bigotry but ethnocentric tone of the President, but to attempt to make a better son out of President Mahama for the people of Akyem-Abuakwa and the entire people of the Eastern Region if we were to make better sons using the standards set by the President.

Before I even attempt this narrative, let me set this scenario, perhaps that will set the path. President Rawlings had 19 years to rule Ghana...11 out of this was under a military regime. When he was given an award, he wholeheartedly used the money to construct the University for Development Studies with campuses in Wa, Navrongo and Nyankpala. At this time, the Volta Region didn’t have a public University. It took Mills and the Mahama regimes to construct the University of Health and Allied Sciences for the people of Volta. President Kuffour had 8 years to rule this country, but it took President Mahama to build a modern market (Kejetia Market), first of its kind in West Africa, for the people of Kumasi. So Mr President, your narrative is never news because you swore an oath to share the cake equitably amongst all of us as Ghanaians irrespective of our geographical location, although you don’t believe in this ratio since you tacitly endorsed Osafo Marfo’s bigotry when he said only regions with natural resources should have the right to rule over others that don’t have. I tried to define natural resources but got stuck in the middle anyway.

Mr President, in your submission, you said President Mahama claimed he undertook massive infrastructure in this country but in your rounds you saw nothing but only reflects on the pictures in the Green Book. You went further to say that Chiefs across the country complained to you about the poor road networks in their respective jurisdictions. I want to ask...has the Okyehene also complained to you that the Kyebi township roads are bad? I know he hasn’t and he won’t because President Mahama started the construction of those roads and when you came to power you didn’t only vary the contract to make it asphalt inclusive, but you double-up the contractor to finish the work on time. This was the same time you ordered for all contractors working on various roads in Ghana including those in Gonjaland (the 138km Tamale-Mankango road and the Busunu-Daboya-Mankarigu road). Your tribalistic tendencies manifested even in your own region when you ordered for roads such as Nkawkaw-Abirem road, Suhum-Asamankese among others to be suspended and audited while Kyebi township roads continued without suspension. It took the NDC to expose your government on these projects in your own region.

Mr President, if works on the Tamale-Mankango road had continued like how you continued the Kyebi township roads without any audit, it would have been completed and in use by now. In fact, finished surfacing was done on the parts of the Busunu-Daboya-Mankarigu road (from Busunu to Langantire), until you ordered for that works on the said project to be suspended and audited. So, if today, you come back after three years only to ask the contractors to continue work again, what is the news about? He who created the problem knows the solution. Was there any audit report after this long while?

If your coming to do this surface-dressing is what makes you a better son for the people of Gonja, then, President Mahama is qualified for a chieftaincy title in Akyem Abuakwa and/or the Eastern Region in general. For the records, President Mahama constructed the 5 small town water projects for the following towns in the Eastern Region: kyebi in the East Akyem Municipal, Akyem Asafo, Apedwa, Kwabeng, Anyinam in Atiwa District and Osenase. This project cost €7.9m. At the time of commissioning this project on the 26th of March, 2014, some of the towns in Gonjaland didn’t have water. I just wish President Mahama could be as tribalistic and ethnocentric like you are today, so that what qualifies a President to be a better son is only when you give all to your people at the expense of the whole country even when you are on oath. President Mahama was bad for providing water for Kyebi but Nana Addo is good for attempting to provide water for Salaga. This is the paradox of contemporary politics in my part of the world.

Not only this, but the Kpong water supply expansion project which was constructed at a cost of $273m and commissioned by President Mahama in 2015 produces 40 million gallons of water per day for 700,000 inhabitants in North-Eastern part of Accra and parts of Eastern Region. In commissioning this project, President Mahama never said he was a better son to the people of Eastern than JB Danquah or Nana Addo’s father who was president of this country sometime ago.

If better sons were made out of the projects one undertakes as President, then the securing of €45m for the construction of the University of Environment and Sustainable Development in Somanya In the Eastern Region and the actual commencement of works by the Mahama administration should have earned John Mahama a permanent chieftaincy title in the Eastern Region. In fact, Nana Addo has decided to move the satellite campus from Donkorkrom to Bunso. This was originally planned to be situated in Donkorkrom as per the recommendations from the 12 member committee. Even in your own region, you are still playing the tribal card.

Mr President, before you came to office, Mahama had secured funds for the Buipe Hospital and Emergency Centre, but you decided to slow the work so to claim credit. Same thing was applied to the Sawla Hospital project and a host of rural electrification projects across Gonjaland under the SHEP 5 and Hunan projects. It has to take President Mahama to draw your attention to the fact that, the Community Day SHS in Central Gonja was not in use after its completion. This call pushed your Minister for Education to run riot with his usual gimmicks before considering putting the said school into use. If this isn’t sheered wickedness, what else is it?

I can go on and on with dozens of projects Mahama undertook in the Eastern Region and specifically in the Akyem-Abuakwa state which would have made him a better son for your people if we were to go by your own standards.

If nepotism wasn’t exaggerated by your administration Mr President, I don’t think you would have the guts to make this statement. You see, your Chiefs once poured libation in 2016, called on their gods and their people to go all out and support your bid. While they did this, they didn’t look at the water projects, road projects, rural electrification projects, the university and about 7 new SHS projects...they only cherished and adored the relationship and never ever wanted a disgrace for their kingdom. Maybe it’s about time we copied your good example just so we will protect our kingdom from shame as well. This won’t be considered as tribalism or ethnocentrism but just a civic responsibility to one’s own lineage.

How I wish I were a little fish in the Kingdom of Gonja.

Museveni apologises over son's Twitter rant on Kenya
59 minutes ago