Aggrieved Customers Of GCFM To Protest For Their Locked Up Funds 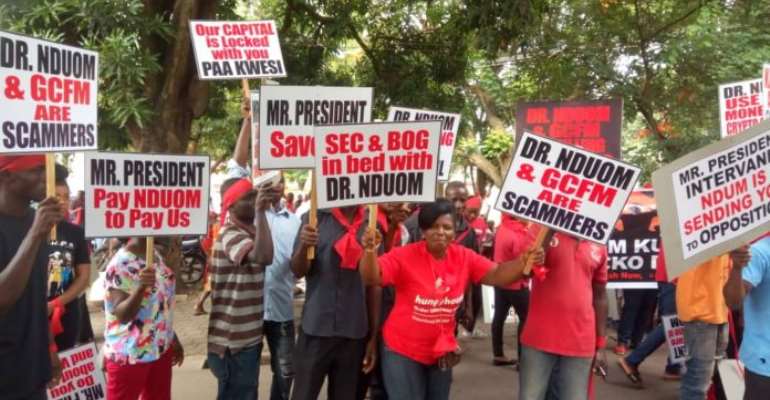 The Coalition of Aggrieved Customers of the Gold Coast Fund Management (GCFM) has given the government a three-week ultimatum to pay the investments to its customers.

The group say they will have no better option than embarking on a massive demonstration on February 25, 2020.

The coalition has also requested the government to provide receipts to all customers who took part in the validation process since majority of them had not received receipts.

Mr Charles Nyame, Public Relations Officer (PRO) of the coalition speaking at a press conference in Accra yesterday, stated that the coalition was “fed up with the devious acts by the government in their attempts to withhold payment to customers.”

He stated that the government had to meet their demands within the shortest possible time else no support would be given during their campaigns.

“We request that the government arranges a meeting with the Finance Ministry, the Securities and Exchange Commission (SEC) and the leadership of the customers to deliberate on the best possible solution for payment of our investments,” the PRO stated.

According to him “if the Nana Addo-led government really cares about the suffering of the customers, then he should put in measures to fix the situation before February 25”, adding that the demonstration would be massive and that the coalition was already in talks with the security services.

“We resolved as a group to vote against the current government during the upcoming 2020 general elections if our demands were not met”, he said.

Meanwhile Mr Nyame has called on other defunct fund management companies to join the fight and the demonstration to help retrieve the money from the government.

He cautioned the President on his stance on the DKM crisis and hoped that he (the President) would apply every means possible to save innocent Ghanaians from the hardships and suffering facing them under his leadership.

“Leadership is set up to solve difficult problems of their followers, please do not fail us,” Mr Nyame stressed.