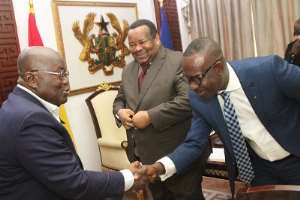 He advised him to follow the footsteps of the Ghanaians who have worked to set high standards on the international arena.

“You are following the footsteps of many distinguished Ghanaians who have worked on the international arena, globally, continentally, and in the region, they’ve set very high standard,” he said and entreated him to excel to bring dignity to Ghana.

President Akufo-Addo, who nominated Mr Donkor for the position, said this when the outgoing president of the Bank, Bashir Momman, and the current president called on him at the Jubilee House in Accra on Friday.

He urged Mr Donkor to conduct himself in a manner that would bring pride and dignity to Ghana and work with the highest standards of integrity and efficiency.

President Akufo-Addo expressed the government’s commitment to give Mr Donkor the necessary support and assistance to enable him succeed in his new role and entreated him to, at all times, serve the purpose of the region.

Mr Donkor, on his part, thanked the President and the Minister of Finance for the nomination and support and pledged to work to lift high the flag of the country.

“Mr President, I know how much you have invested in this process and I cannot afford to disappoint you and Ghana at all,” he said and promised to help support the development agenda of the government.

The outgoing president of the bank also congratulated Mr Donkor and wished him well.