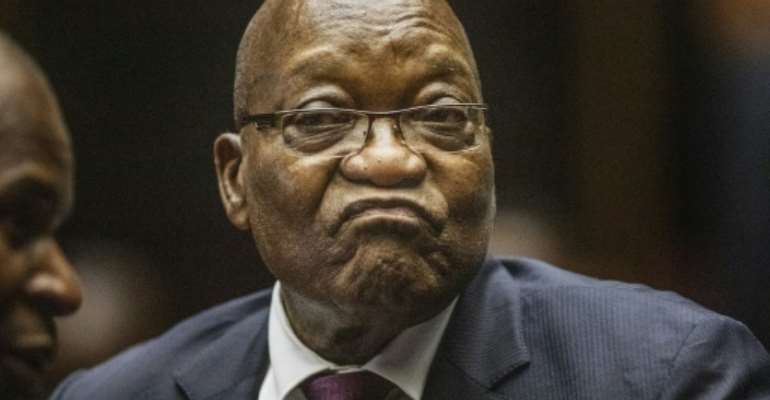 Former South African president Jacob Zuma faces 16 charges of fraud, graft and racketeering related to an arms purchase in the 1990s, when he was deputy leader. By Michele Spatari (POOL/AFP/File)

A South African court on Tuesday issued an arrest warrant for embattled former president Jacob Zuma after he failed to appear for a pre-trial hearing over corruption charges related to a 1990s arms deal.

But the court said that execution of the warrant will be deferred until May 6 when the case is due to resume.

Zuma's lawyers said he was not able to attend the pre-trial hearing on Tuesday because he was ill and receiving treatment abroad, in the latest twist in a case that has seen numerous legal turns over a decade and a half.

The High Court in the southeastern city of Pietermaritzburg issued the warrant after it questioned the authenticity of the sick note said to have been signed by a military doctor.

"The court accepts that Mr Zuma may be unwell," said judge Dhaya Pillay. "But this court needs reliable evidence that Mr Zuma is indeed ill."

"It is not clear that (the doctor) is indeed a regular practitioner," she said.

State prosecutor Billy Downer said it was a "criminal offence" for the 77-year-old Zuma, who was in office between 2009 and 2018, to skip court.

Zuma's lawyer Dan Mantsha told reporters outside the courtroom that "our courts have no sympathy, no compassion".

"We are very concerned when courts issue warrants under the circumstances like this when the whole country knows that president Zuma is not well ... indeed president Zuma underwent two operations in early January this year," Mantsha said.

"When you start to issue warrants under such circumstances, people start to question whether we are all equal under the law."

He said for the court to doubt "whether he is sick or not, is absolute unimaginable".

Mantsha vowed that the "elderly" Zuma, will attend court when he is fit, as he has done for previous hearings.

Local media suggested that Zuma is in Cuba undergoing treatment for an undisclosed ailment.

'Afraid to face the music'

Zuma posted a video clip on Twitter on December 29 of himself dancing with a local gospel choir, with the caption "Happy Holidays.. From myself and the Umlazi Gospel Choir".

The former president has not tweeted since.

An empty dock where Zuma was expected to attend at the High Court in the southeastern city of Pietermaritzburg. By Kim LUDBROOK (POOL/AFP)

In all Zuma faces 16 charges of fraud, graft and racketeering related to the purchase of fighter jets, patrol boats and military equipment when he was deputy to the country's second black president, Thabo Mbeki.

Both Zuma and French defence company Thales, which supplied equipment for navy vessels, deny the charges.

Last year Zuma unsuccessfully tried to stop the trial from going ahead.

If the trial takes place, it would be the first time Zuma faces a court on graft charges, despite a string of accusations over his long political career.

He has also been accused of organising the systematic plunder of government coffers in a scandal known as "state capture".

Zuma appeared at an inquiry into the scandal in July, putting on a defiant performance and denying all wrongdoing.

He was forced to step down in 2018 by the ruling African National Congress (ANC) party after a nine-year reign marked by corruption allegations and dwindling popularity.

The main opposition Democratic Alliance hailed the warrant decision, saying the court "has put its foot down and shown Mr Zuma that he can no longer continue wasting the court's time and public resources because he is too afraid to face the music".

"He has gone above and beyond and tried every trick in the book to avoid being held accountable for his alleged hand in the arms deal," the DA said in a statement.

Arrest warrant issued for 10 recalcitrant motorists who snub...
38 minutes ago