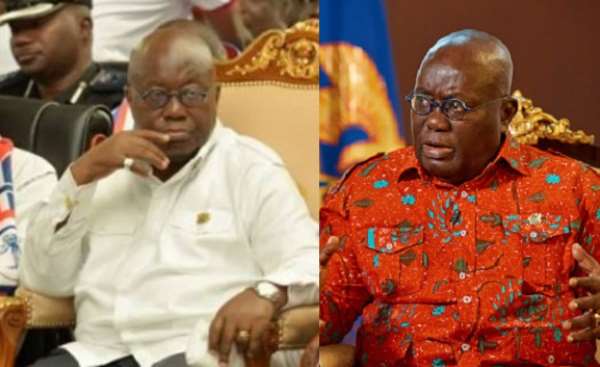 The social network or the media is a wonderful place that allows you to connect directly with your audience and also an opportunity to see some old photographs of current African leaders to convey your thoughts and feelings about them.

We've all heard this kind of phrase: "a picture is worth a thousand words." Indeed, this old photograph of the Ghanaian leader, Nana Akufo Addo, has more than one thousand stories to tell.

The old picture of our president demonstrates sad countenance, unhappiness, weariness and like a man who has neither hope for today nor tomorrow of becoming a president.

Then after tough moments, Akufo Addo wins the 2016 elections to be the president of Ghana and as we know those who suffer to get something will never let it go. Nana Akufo Addo has now shown Ghanaians that money is power.

We see this force and feel it sometimes when leaders use it as a weapon of oppression from time to time but do we understand what the power of money is? Comparing the two photographs of Akufo Addo above will give you the right answer.

To understand what the power of money is, you need to pay attention to how people behave with them. Money tells a person what to do. It gives one the power and opportunity to do whatever he likes whether good or bad, some don't care.

This is one of the reasons after becoming president, the sweet taste of power has enabled Akufo Addo to adapt many lifestyles, a little dictatorship, democratic and nepotism, to build a solid wall around him.

Akufo Addo has failed his fight against corruption and has also failed to investigate any of his ministers involved in corruption scandals. Just last week, it appeared in the Ghanaian media that 500 seized excavators have mysteriously vanished without a trace.

As the Ghanaian leader, Nana Akufo Addo should have shown a little concern to find a way to trace the missing excavators but he didn't do that.

However, as soon as it appeared that the opposition leader, John Mahama is linked to the Airbus scandal, the president has quickly assigned the Special Prosecutor, Martin Amidu to investigate.

How can Ghana be a successful country with such unprofessional conduct? Anyone who talks about Akufo Addo immediately becomes an enemy.

It seems Ghanaian journalists are even afraid to criticize Akufo Addo's administration, ever since Mr. Ahmed Hussein-Suale was killed. Everyone is quiet in Ghana and will not dare to criticize or demand answers from Akufo Addo.

And if you dare to say something wrong or write an article about Akufo Addo that people are not happy about, instantly you become an enemy, with insults coming from all directions.

But in this world who cares if someone hates or likes someone? After all, the world went free and Christ who didn't commit any crime was left alone to carry the cross to his crucifixion.

Sometimes, I feel very sorry for Mahama. Corruption is in each administration of every Ghanaian leader but it seems his involvement is the only one that has overflowed its banks that his enemies can see.

You will only miss your water when the well runs dry Mahama. It's never an easy task to get power back if you lose one, therefore, you must understand why Akufo Addo will not permit you to be president, probably again.

Because he has built both visible and invincible walls around him. The promotion of the police, army, and immigration, is one of the strongest foundations a leader needs, therefore, Akufo Addo has done that.

Together with your enemies, John Mahama, you may probably have no chance to win the 2020 elections but who knows what might change the course because there are still months ahead of us.