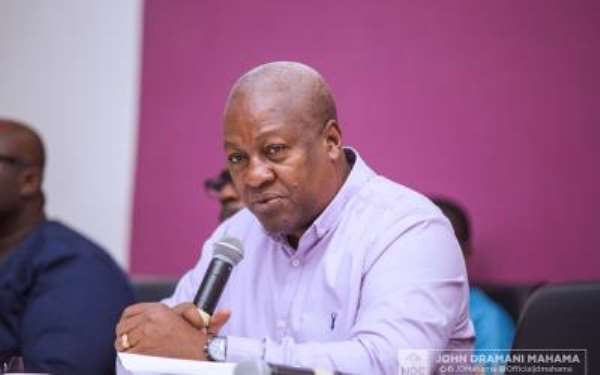 In the politics of “chooboi, eii” a person or a leader/party exploits and lines up a likeminded group of citizens or people with a relative propensity for mob actions, including inclination to lawless ways of contributing or approaching societal issues, such as economic, political/electoral, educational, and the like.

The exploiters of the “chooboi” political game plan as former President John Mahama and his NDC core cheerers are currently executing on nonchalant fashion, involves using the gullible citizens, as well as applying subtle manipulation of some of the socioeconomically dissatisfied educated class in the population. The main goal under this “yen tie obiara” mob strategy is to win political power not only by playing on the people’s genuine social or economic anxieties and political emotions, but also to appeal to people’s basest instincts that lack reasoning and critical thinking.

Why do some leaders/politicians engage deeply in the politics of chooboi? Keep in mind these leaders or public office seekers, like Mr. John D. Mahama and his followers, who are using mob or “chooboi” tactics to attempt to win elections, often do not have any far-reaching campaign message. And even if they have message, it’s all based on rehash party platforms from the “same old, same old” stuffs, as Americans would say.

Here is an honest question for all: which fair-minded Ghanaian at present is not aware the country’s major opposition party led by Mr. John Mahama, does not have offbeat or viable alternative policy as election-year campaign message except “chooboi, eii” or our-way-or-the-highway political approach? Certainly, many of us know in the “chooboi” universe, sorting out issues of national importance or embarking on the campaign of vigorous ideas and reasonableness is not one of the standard practices. And, there is a cynical reason for this approach or behavior.

Think about it: Former President Mahama has been in various, sensitive, elected positions in this country to the point that he has reached his wit’s end in power and also run out of fresh ideas. But this is not the typical, selfless politician who truly accept the age-old philosophy that life is like a play stage, where people play their part and leave as the audience are clapping loud for the performer

Just listen to the ex-president’s utterances carefully, none of his public policy positions is creatively new. So, the default strategy is to muddy the political waters as much as possible such that the gullible Ghanaians and those who appear to be peeved for reasons best known to themselves, may not know which parts of the mud-spattered waters are shallow or prone to drowning.

For some sad reasons, it seems like some of the NDC’s flag bearer’s “chooboi” campaign mantras are gaining some tractions among a sizable pack of vociferous Ghanaians, because as Mr. Mahama had pointed out when he was in charge of the nation’s presidency, the average Ghanaian tends to be forgetful of the past sociopolitical and economic hardships. It is troubling that in our culture a person in authority can “violently slapped” the face of the less powerful citizens and get away with it by often buying the victims’ silence or just let the incident disappears through Ghanaian culture of forgetfulness. Evidently, Mr. JD Mahama, Ofosu-Ampofo, Asiedu Nketia, and many others, duly understand the Ghanaian amnesia culture; and they are cynically exploiting it to their advantage.

It really is unfortunate; suffice it to say, ex-President Mahama and his hijacked NDC’s easily manipulative campaign strategy seems to have audience with a good number of Ghanaians, including some of the all-knowing media clannish group. This action plan exposes a large group of Ghanaians who are not sincerely willing to think outside the box and hence shake off the yoke of mediocrity entrapped in the “chooboi, eii” subculture.

Probably, what makes this afore-stated cultural mindset thrives is that the phenomenon appears to have normative content to it; which serves to feed on or reinforce the mindset/behavior that portrays what ought to be as opposed to what the actual realities are. For example, the fact that a bunch of Ghanaians are in denial that Mr. Mahama himself was in power about four years ago and he put Ghana’s economy in a quasi-bottomless pit. What else can he offer again?

The NDC presidential aspirant and his loudest noise makers are running around the country misinforming and confusing the people of the “golden-age” of Mahama past government, but they will never tell or help the vulnerable Ghanaians understand that it is one thing to destroy something easily, and entirely different thing to try to build the destroyed structure. No well-constructed house can be built in a day but destroying the same well-built house can happen in one day.

The reality is that any fool or a person can destroy a piece of property in a split’s seconds via the science of implosion, but one is yet to see the technology that builds a well-propped house in one day. Heaven knows the previous Mahama-led NDC administration miserably screwed up the beloved Ghana’s economic structures, but barely within four-year period Mr. Mahama is smooth talking Ghanaians to believe that his successor (Nana Addo) is too slow fixing the huge mess he (JDM) left behind.

Let anyone who cares take this to the bank: Ex-President Mahama is not really interested in seeing many Ghanaians think critically, because thinking beyond his “chooboi, chooboi eii” plan will expose his deceptions and manipulations and that will dent any chance he and his party may have in the upcoming general elections. It is why the former president and his cheerleaders, including some “confused” brothers and sisters in Ghana will use the “chooboi, eii” bandwagon to create exaggerated scenes all over the place as if every move the current president takes or the classy Electoral Commissioner Ms. Mensah makes will bring unquenchable inferno into the country.

As already demonstrated, one of the manufactured “scenes” include supporting or attempting to occupy the Electoral Commission’s enclaves across the country, because as a “drama” leader himself, ex-President Mahama clearly knows millions of Ghanaians like to see melodramatic or confrontational events, although they tend to forget about them quickly within two weeks’ time, even if it will last that long. Clearly, some of us strongly believe Ghanaians deserves far better than former President John Drama(ni) Mahama’s politics of “chooboi, eii” campaign!

Bernard Asubonteng is a US-based writer, and a political science lecturer.

We must tackle poverty as national security threat – Parliam...
23 minutes ago