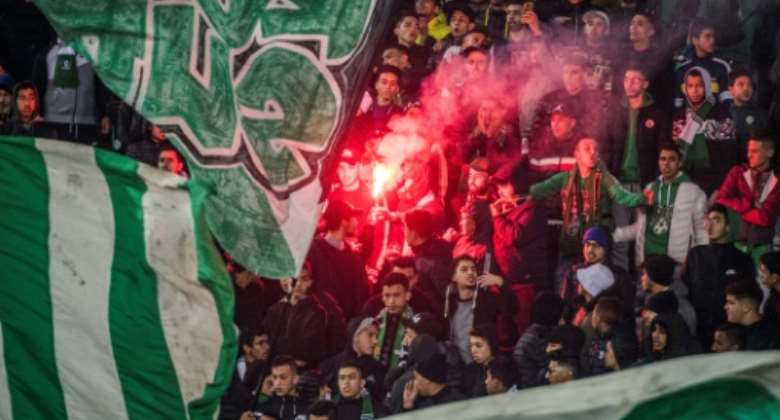 The chants of young North African football fans reflect frustrations far beyond those connected to the beautiful game. By FADEL SENNA (AFP)

From Casablanca to Algiers via Tunis, the chants belted out across football stadiums echo young North African fans' frustrations not connected to the highs and lows of the beautiful game.

Chants of "F'bladi delmouni!" ("Oppressed in my country!") at the demonstrations that have been commonplace in Algeria since last year originated on the noisy terraces manned by the ultras of Morocco's Raja Casablanca.

The song of the club's "Ultras Eagles" has notched up close to nine million hits on YouTube.

On match days, the chant is bellowed to the accompaniment of drumbeats, smoke bombs and elaborate, choreographed displays.

"We live under a dark cloud in this country... You've robbed the wealth and shared it with foreigners. You've destroyed a whole generation," are among the lyrics of the song which came out in 2018.

For Moroccan author Abdellah Taia, the song is "despairing, lucid, true, without any embellishment".

Khalid, a green-scarved fan emerging from a recent match, said it "describes the lives of thousands of young people from working-class areas".

Raja Casablanca is no exception.

Youths in both Tunisia and Algeria, faced with inequalities and curbs on freedom, voice their rejection of corruption, frustrations with life and desire to flee abroad through the songs of the ultras.

Fans of Ittihad Tangiers sing out against "injustice" and demand "a boat to save us from this land".

Such chants "criticise everything and straddle sport and politics", said Moroccan journalist Abderrahim Bourkia, who has written a book on the ultra movement.

For sports researcher Moncef El Yazghi, "it's a new form of protest which doesn't seek authorisation and without any fanfare".

The fervour can spill out of the stadium, such as when Raja's supporters group tweeted "total support for all those detained" in Morocco for their views.

Algerian football stadiums have since the late 1970s provided an outlet, sometimes a violent one, for young people who feel robbed of a future.

They came out in support of the Hirak protest movement that finally led to the ouster of longtime president Abdelaziz Bouteflika in April 2019 following months of mass street demonstrations.

"In a protest movement that rejects the framework of traditional parties, the ultras emerge as the most structured, especially as they've suspended differences between clubs in the general interest of the Hirak," wrote historian and author Jean-Pierre Filiu.

In Tunisia, especially since its 2011 revolution, fans give voice to social and political woes in their chants, pinning blame on government corruption.

Supporters of Raja Club Athletic chant slogans and wave flags at a Moroccan football match between Raja and Mouloudia Oujda in January. By FADEL SENNA (AFP)

"Ach, our life," is a constant refrain of the African Winners ultras of Club Africain in the first division of the Tunisian football league.

Supporters in Egypt were also active during the Arab Spring revolts of nine years ago.

In 2019, small-scale anti-government demonstrations took place on match nights of Cairo club Al-Ahly. They were swiftly put down, with police making thousands of arrests.

In 2018, 14 supporters of Tetouan in the north were jailed for up to 10 months for waving Spanish flags in the stands to protest the Moroccan navy's killing of a female student trying to cross by sea to Spain.

"But still we're less exposed inside the stadium. We can express ourselves without facing problems," said Raja supporter Tarik.