When The Protected Is Attacked By The Protector: The Case Of Midland Police Assault On A Defenseless Woman 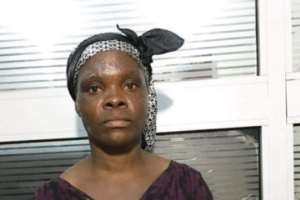 The Police Force now the Police Service has been part of us ever since societies were established. They've been in different forms and shapes and have evolved over time with the evolution of society.

In a typical Akan society during ancient times, it had what was called "Asafo" Companies. The word "Asafo" according to Okyerema Kwamena Pra (who is a traditional musician and divine drummer) literally means a "paths maker" or "one who shows a way".

Among the Asafo companies were members who acted as the military to defend the community against external aggression, they had those who fought fire in case of an outbreak and they also had the police to help in public order, safety and sanity amongst tribesmen and women. One cardinal principle of the Asafo company was to aid in development. This was what was happening in pre-colonial Ghanaian (Akan) society.

According to the Police website, in 1894, the Institution of Police was formalized with the passing of the Police Ordinance which gave legal authority for the formation of a Civil Police Force now the Ghana Police Service.

2.Apprehension [arrest] and prosecution of offenders

3.Maintenance of law and order

4.Due enforcement of the law

Professional policing was introduced by the British Colonial Authorities to the Gold Coast now the Republic of Ghana in 1821. Prior to that, policing or maintenance of law and order was organized by the traditional authorities such as the local headsmen and chiefs, who employed unpaid messengers to carry out the executive and judicial functions in their respective communities. In 1894, the Institution of Police was formalized with the passing of the Police Ordinance which gave legal authority for the formation of a civil police force.

In 1902 the force was split into General, Escort, Mines and Railway Police, which was legalized by the Police [Amendment] Ordinance of 1904.

The Marine Police was formed in 1916 but disbanded in 1942 and replaced by Customs Excise and Preventive Service. The Criminal Investigation Department [CID] was formed in 1921 with the finger print section fully operational in 1922. In 1948, the Police Reserves Unit was formed to combat riotous mobs, following the 1948 riots in the country.

In order for the Police Service to perform, the above functions has been fraught with a lot of challenges including the Midland Savings and Loans brouhaha. It was reported on social media and main stream media that a woman had gone to withdraw her own money from Midland Savings and Loans branch at Shiashi, a suburb in Accra. The Police man who was required by law to protect life and property was seen assaulting this helpless woman at the premises of the financial institution. The video went viral on social media and what we do best as Ghanaians, the talking has begun and it appears almost all of us have been taking aback by that brutality. Need we be surprised? I don't think so.

On May 11, 1995 Nana Addo Dankwa Akufo-Addo and Kweku Baako led the famous “Kume Preko” demonstrations of the Alliance For Change (AFC), a broad-based political pressure group. During that demonstration, it was reported that four people lost their lives due to police brutality. Indeed Dr. Nyaho-Tamakloe captured this in his book titled, “Never say die” The Autobiography of a Ghanaian Statesman”, mentions Kwabena Asante 22, Jerry Opey 25 and Richard Aminga 43, and 14-year-old boy who was standing in front of his house was shot dead by a stray bullet during the violence that characterized the demonstration.

As recent as 16th September, 2015 during the "Let My Vote Count Alliance" demonstration, there was widespread police brutality that was show on television for us all to see. The condemnation wasn't widespread possibly because of the politics involved. There are several reports of police brutalities against civilians to the extent that some even lose their lives and nothing happens and even if something happened it's at the blind side of the civilian population.

The month of July 2018 has been a bad one for the Police Service. The media has been awash with bad reportage about the Police Service. On the 11th, the police gunned down seven (7) suspected robbers but this didn't go down well with the inhabitants of Asawase in Kumasi who claim those shot were not robbers and have been deliberately killed by those who are supposed to protect us and have gone on reprisal attacks against the police in Kumasi. Then on Thursday, 19th a video went viral on social media explicitly showing a police man brutally assaulting a woman who was carrying a child. Worse of all, on the 21st also a policeman escorting Mon-Tran Ltd bullion van, in an attempt to disperse a funeral crowd at Krobo Odumase shot and killed the driver of the bullion van he was meant to protect. It was reported that the van run into a funeral crowd and in an attempt to disperse the crowd with a warning shot, the police officer shot dead his driver.

From the above, and in my humble view, I think what happened at Midland is just a tip of the iceberg about how the police treats civilians. This has generated public sympathy and outcry possibly due to social media. How about those that have happened when social media wasn't in vogue. The police service as an institution can make some mistakes in their line of work but it appears with the least provocation the protected is being attacked by the protector with reckless abandon.

With reference to the Midland matter, the NCCE and Occupy Ghana a pressure group have have issued statements. While the NCCE has recommended stiffer punishment for the police officer in question, they also go ahead to laud the Police Service for the numerous reforms they've initiated over the years to turn them into a formidable institution in a modern democratic state like ours. But Occupy Ghana wants punishment and or sanctions be meted out to both the police officer and especially the officials of the savings and loans company. Occupy Ghana went on to state “it appears the lady was assaulted as a result of an instruction by the Company’s officers to the offending police officer to remove her from the premises. Then they either stood by while she was subjected to the beatings or only made half-hearted attempts to stop it. “That suggests that the Company and its officers, at the very least, instigated, facilitated, encouraged or promoted the policeman’s offences". Indeed the interior minister Mr Ambrose Derry has added his by saying that, the police officer should be sacked and in his view he doesn't merit wearing that uniform. He added that, it's highly unprofessional for an armed police officer to assault an unarmed female civilian in that manner. These sentiments expressed above are not different from the public outcry ever since the video went viral. But, would sanctioning the police officer and or the officials of Midland Savings and Loans solve similar occurrences in the future or we need a different approach in how we recruit and train police personnel?

I sincerely think we should stop the pretence and begin to put in place measures to curb such sad occurrences. What at all has gone amiss with our police service ? Is there a problem with recruitment? Or there is a problem with training? Or proper medical examinations including clinical psychological testing should be taken seriously? I suggest all police recruits going forward be subjected to thorough clinical psychological examination before employment.

I'm against mob action perpetrated against our Police Service no matter what error they've committed. But, if the citizens begin to assume and conclude that instead of they being protected by the police, rather they are being attacked by them that wouldn't auger well for our country. I've always said that the civilian population far outweighs that of the police, and it would be in the interest of the police service to make us their friends than turn us into their foes. When that happens, the police would find it very extremely difficult to discharge their duties as by law established and that would lead to a total breakdown of law and order in our dear motherland. The time to look at the whole process of recruitment , training, standard operating procedure, posting and supervision of our police service is now. May God bless our homeland Ghana.