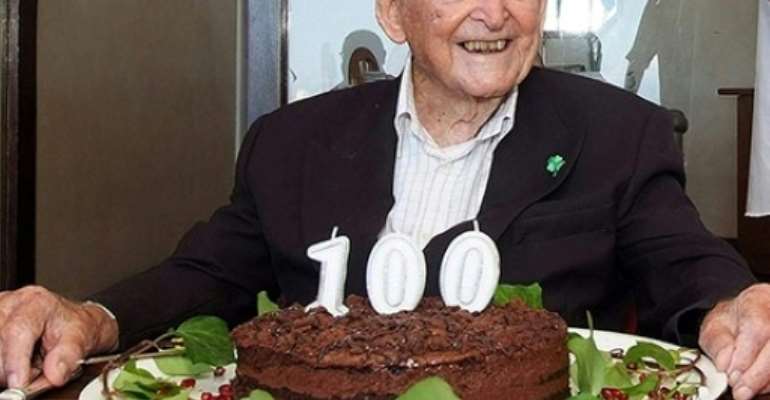 Hoare shot to fame in the 1964 when he led some 300 soldiers, mostly South Africans, in the now DRC to crush a communist-inspired rebel uprising. By Roy Reed (FAMILY HANDOUT/AFP/File)

Mike Hoare, one of Africa's best-known mercenaries who fought in the Democratic Republic of Congo and led a failed coup in the Seychelles, has died aged 100, the family said on Monday.

Nicknamed "Mad Mike", Hoare died on Sunday in South Africa where he had retired.

Born 1919 in India to Irish parents, Hoare was educated in England where he qualified as a chartered accountant.

He attended a small-arms course at the London Irish Rifles and an officer training course in the British army during WWII and went on to serve in India and in Burma.

The fervent anti-communist then emigrated to South Africa in 1948.

"The well known adventurer and soldier of fortune, Lt Col 'Mad Mike' Hoare, died in his sleep and with dignity aged 100 years at a care facility in Durban on 2 February 2020," the family said in a statement.

His son Chris, said most people described him as "an officer and a gentleman", but "only a few realised there was a bit of pirate thrown in".

He added that Hoare "lived by the philosophy that you get more out of life by living dangerously, so it is all the more remarkable that he lived more than 100 years".

The soldier-for-hire shot to fame in 1964 when he was hired by then Congolese prime minister Moise Tshombe to crush a communist-inspired rebellion which broke out shortly after the country's independence from Belgium.

On his return to South Africa, he reportedly told journalists that "killing communists is like killing vermin, killing African nationalists is as if one is killing an animal".

"My men and I have killed between 5,000 to 10,000 Congo rebels in the 20 months that I have spent in the Congo. But that's not enough. There are 20 million Congolese you know and I assume that about half of them at one time or another were rebels whilst I was down here."

His soldiers' nickname "Wild Geese", inspired the title of a 1978 film about mercenaries in Africa which starred Richard Burton, Roger Moore, Richard Harris and Hardy Kruger.

In 1981, Hoare led a group of mercenaries that planned a coup to return to power the pro-Western founding president James Mancham to power in the Seychelles archipelago.

Hoare was a qualified chartered accountant. By - (CENTRAL PRESS/AFP/File)

The group of more than 40 entered the country disguised as a beer-drinking tourist party called "The Ancient Order of Froth-Blowers".

However, their plan came undone when one of his men got into the wrong queue at customs and an airport inspector found a weapon in the luggage and a gunfight broke out.

The men then hijacked an Air India flight and forced the pilot to take them to Durban in South Africa to escape.

Hoare was arrested, convicted and sentenced to 20 years, 10 of which were suspended.

But he only served nearly three years in jail before he relocated to France where he lived for 20 years.

Hoare returned to South Africa in 2009. He is survived by five children.

His peers from the heyday of mercenaries in Africa include the likes of Frenchman Bob Denard and his "affreux" ("the frightful ones") and Belgian "Black Jack" Schramme.

Arrest warrant issued for 10 recalcitrant motorists who snub...
1 hour ago