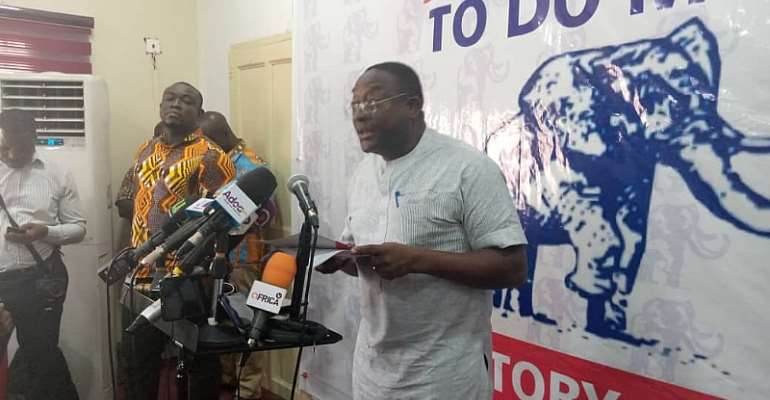 According to the party, John Mahama cannot exonerate himself from the scandal.

At a press conference in Accra on Monday, Director of Communications of the NPP, Yaw Buaben Asamoa said the National Democratic Congress (NDC) flagbearer played an active role during the purchase of some aircraft for Ghana in 2012.

He, therefore, asked Mr. Mahama to break his silence on the matter.

Ghana has been cited as one of five countries in which global aerospace group, Airbus SE, allegedly bribed or promised payments to senior officials in exchange for business favours between 2009 and 2015, according to the UK's Serious Fraud Office.

The UK's Serious Fraud Office, however, in its statement of fact did not name the Ghanaian officials because investigations were still ongoing.

President Nana Akufo-Addo has since referred the Airbus bribery scandal to the Office of the Special Prosecutor for investigations.

These investigations are expected to be conducted in collaboration with the United Kingdom authorities, according to a statement from the presidency.

A Deputy Information Minister, Pius Hadzide, has assured that the government will take the information arising from the Airbus bribery scandal seriously.

In an interview with Citi News, Mr. Hadzide said: “government takes a very serious view of the revelations that have come from the courts in the United Kingdom.”

He also said the government was counting on the Office of the Special prosecutor to “establish the individuals who have been singled out.”

“…especially government official 1, who, documents indicate, was the fulcrum around which these create, loot and share scheme evolved,” the Deputy Minister added. Response from NDC

The National Democratic Congress (NDC), which was in power during the period the bribes were allegedly paid, denied the suggestions of corruption amid speculation from the public.

The party in a statement signed by former Attorney General, Marietta Brew Appiah-Oppong, argued that media reports on the matter did not accurately capture the approved judgement of the case in the UK.

“The reports alleging that Airbus SE paid bribes during the administration of President John Evans Atta Mills and John Dramani Mahama are false, misleading and do not reflect the Approved Judgment. Indeed, the Approved Judgment of the Crown Court of Southwark approving the DPA between Airbus and the UK Serious Fraud Office does not allege that any payment was made by Airbus to any Ghanaian Government official,” the statement said. Payments in Ghana

In the case of Ghana, the court found that the company's bribe was to land the contract of purchase of a military transport aircraft.

“Between 1 July 2011 and 1 June 2015 Airbus SE failed to prevent persons associated with Airbus SE from bribing others concerned with the purchase of military transport aircraft by the Government of Ghana, where the said bribery was intended to obtain or retain business or advantage in the conduct of business for Airbus SE,” the court's statement of offence noted.

The documents indicated that one of the unnamed Ghanaian officials was “a key decision-maker in respect of Government of Ghana aircraft orders.”

A number of Airbus employees “made or promised success-based commission payments of approximately €5 million” to one of the Ghanaians implicated in acts of corruption.