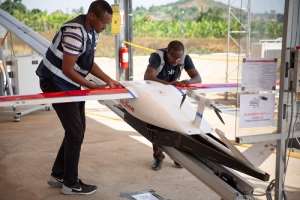 The government's project to ensure emergency supplies of essential medicines by Zipline drones in the northern parts of the country is expected to take off by the end of this month, February.

The GH-3 Distribution Centre is almost ready at Vobsi in the North East Region, and it will start full operations according to the Community Lead Officer of Zipline Technologies, Simon Batamya Aseno.

When journalists visited the centre at Vobsi, near Walewale, the buildings were completed and the storage areas for the medical items, offices and staff accommodations were also completed.

Besides, the drone launcher and drone landing area were completed.

The Vobsi GH-3 Distribution Centre of Zipline is among four distribution centres the company is providing across Ghana from where medical supplies are being distributed from in emergency cases.

Mr. Aseno said that the Zipline drones have the capacity to fly a distance up to 80 kilometres from the Vobsi Distribution Centre at a speed of 120km/h and was optimistic that the long hours that health facilities had to wait to receive emergency medical supplies would reduce drastically and save many lives in the process.

In April 2019, the Vice-President, Dr. Mahamadu Bawumia launched the operations of Zipline Drone Delivery Technology in Ghana at Omenako, near Suhum, in the Eastern Region which paved the way for the commencement of works on three other distribution centres.