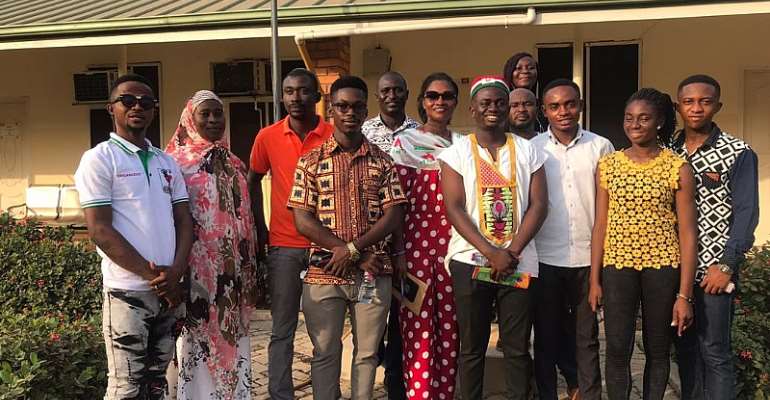 Education Chapter of The Convention Peoples Party (CPP) Teschart KNUST branch held its maiden edition meeting on Saturday 1st February to deliberate on how to make the CPP strong and rekindle the spirit of nationalism among the youth.

He said the CPP Ashanti region has structures, and each constituency is responsible for every member who resides within its jurisdiction.

Speaking on behalf of his Comrades and the newly elected executives, Emmanuel Laryea said it is time, the youth of the country get involved in building the nation.

He added that the future belongs to the youth especially the students and it is only fair that the youth are allowed into leadership so that they can be mentored by the experience. "So that one day if they find themselves at the helm of affairs in leadership, they can deliver."

Comrade Henry Amoah, the Ashanti Regional TESCHART Coordinator also spoke about the relevance of Teschart in building a robust and strong ideological intellectual wing of the CPP.

He said the huge gap that exists between the rich and the poor in this country, is because, Ghanaians have refused to believe in the CPP and give the party, the chance to set things right.

He charged all the newly elected members not to forget what Osagyefo Dr Kwame Nkrumah said, that organisation decides everything, and said each of them is an organizer and should hit the ground organizing for the CPP to achieve victory in the upcoming 2020 elections.

Comrade Fedelis Adjei the Deputy Ashanti Regional Youth Organiser in charge of Operations and Grassroots organisation said Nkrumaism (scientific socialism) is still relevant in contemporary Ghanaian society as it was in the 1950s and 1960s when the CPP was in government.

He said as a Republic we should be worried how our major crucial institutions and resources have landed in the hands of foreigners.

He stressed that the only way to reverse this unfortunate situation is to vote the CPP back to power to nationalise these vital and sensitive institutions back to the people of Ghana.

Comrade Sulemana the Ashanti Regional Youth Wing Coordinator For the Zongo and settlers community in a statement read on his behalf said there is too much injustice in Ghana because the few good and religious young men (Youth) have refused to be part of politics which he describes as an avenue to build a nation.

He asked if the country will have been in such a mess if young men and women who fear God (Allah) and believe that, they will account for their stewardship one day were the ones at the helm of decision making.

He said he has associate himself with the CPP as a Youth because it is the only political party whose policy for social justice, talks about love among fellow people (Comradeship) a party which believe in leaving a good legacy for her future leaders and making them economically independent.

He said the Zongos and settlers communities in the Ashanti are being organised well under his supervision to make victory 2020 possible for the CPP.

Representing the Region was Lovia Owusu Ansah, the Educational Secretary for the CPP in the Ashanti region noted that her outfit has been educating, grooming and training alot of the youth, from both the constituencies and the Tertiary branches and assured that very soon Operation One Media House One CPP Rep will be launched.

Explaining further, she intimated that her outfit through periodic ideological training are educating party communicators who will be introduced to all the media platforms in the Ashanti region to remind Ghanaians of what the CPP did for this country and will do when CPP is voted back to power.

He said the communicators will not indulge in the blame game of the NDC and NPP whiles on air, but will proffer solutions instead. She further charges young women to be part of the CPP as they are good managers of everything they decide to do.

She said the CPP will not only harness the potential and competence of women in the CPP but will also give them the necessary platforms and support to push them to higher level.

Comrade Francis Dery the constituency organiser for the Oforikrom constituency expressed satisfaction of attendance and participation and express how hopeful he is that Ghana will work again under a CPP government.

In a message to his Comrades read on his behalf, the Regional Youth Organizer for the Ashanti region, comrade Osei Kofi Acquah, said the NPP and NDC have proven that they lack the competence, sense of urgency and patriotism to build the country.

He stressed that the NDC and NPP have deviated from their core mandate which is to ensure prosperity for all to vigilante clubs, maiming, killing and looting the country.

He added that the CPP youth will through the spirit of volunteerism, patriotism and commitment bring back love.